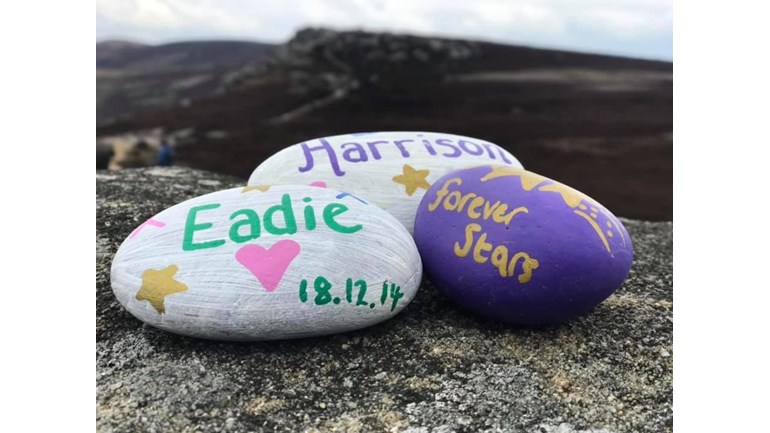 We fundraise for stillbirth bereavement to provide facilities & support resources

This year we would like to raise awareness of how baby and infant death can affect men. Often and understandably the focus falls on the mother at these terrible times. On Friday 17th May Daniel Barnett, Stephen Hoskisson and Paul Gamble will be part of a team of 10 doing the National Three Peaks Challenge which involves climbing Ben Nevis, Scarfell Pike and Snowdon in 24 hours. The team will be taking rocks to the summit in memory of Eadie, Harrison, Harry and Sarah and all those taken too soon. The male counterparts affected by baby loss are often expected to be the strong ones who just get on with it. They are often the ones who have to break the terrible news to other loved ones, the ones who have to go back to work after a short time. They need to grieve and have the option to talk about their children too. This event is for the dads, brothers, uncles, granddads who have always been there and continue to do so.

Then on the 9th June the Warrior Assault team get together again for the second year running to crawl, climb and roll through mud and water at Holme Pierrepont  to support the charity Forever Stars. Last year a team of almost 100 completed the course in support of this charity.

Forever Stars was setup following the stillbirth of Emily Daniels on December 19th 2013. Although Emily was stillborn, Michelle and Richard had to go back on to the labour ward where the surrounded by the sounds of child birth, families celebrating and of course the sound of healthy babies.Michelle and Richard decided that they would fundraise in the name of their daughter to facilitate the building and equipping of bereavement suites and other support material and facilities of future bereaved parents in and around the East Midlands.

Please give whatever you can, the next big plan is the Forever Stars bereavement garden at Highfields. This will be a beautiful, tranquil space to sit and remember our loved ones.

Charity Registration No. 1156990
Find out more about charity fundraising