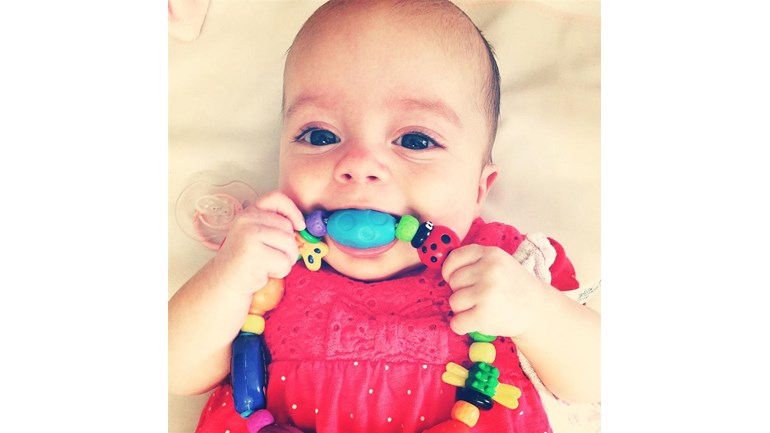 Over the next few months my family are organising events to raise money for Ronald McDonald House in Glasgow, this is my story.

I was born with gastroschsis at 37 weeks - my bowels had escaped through a hole in my abdomen while my Mummy was pregnant.

Just a few hours after I was born the Special Care Baby Team had to take me away from my parents by ambulance from Glasgow Southern General to Yorkhill Hospital. My bowels were put in a special bag called a silo which was suspended above me, gravity slowly helped them back to where they were meant to be. At 6 days old I had an operation, the last few inches of bowel were gently pushed inside my tummy and the hole was closed. My umbilical cord was saved when I was born so I now have a designer belly button rather than a large scar. After my wound had healed a little I finally got my first cuddles with my Mummy and Daddy. (Don't tell them this, but I think they enjoyed them more than me!)

I experienced my first taste of milk when I was ten days old, it was only 5ml every two hours to start with, I thought it was so amazing I kept crying for more! I wasn't allowed to feed before my operation; or more often afterwards; as there was a risk my bowels wouldn't be able to cope. Sometimes I was so tired the nurses or my Mummy had to put my milk down a nasal-gastric tube instead so I wouldn't be going hungry. I really didn't like these NG tubes and got pretty good at pulling them out- my record was 6 in 24 hours! I also had a Picc line going into one of my veins to ensure I was receiving enough nutrients and fluid to keep me healthy.

After 13 days in the Neo-natal Intensive Care Unit I was transferred to a general surgical ward as I was recovering well; my consultant even said I was breaking records with my progress!!

I was taking a little bit more milk each day and was upgraded from a syringe to a bottle, just like any normal baby. The first time I was so excited I managed to guzzle it all within 20 seconds! I was gaining weight and managing to take milk well without vomiting so I finally had my lines and tubes taken out. This also meant I could have a bath at long last and wear clothes properly rather than having one arm poking out the neck of an outfit.

Once I was up to 84ml and maintaining this amount each time my Mummy was allowed to stay overnight with me in the ward before sending me home.

At exactly 1 month old, I was discharged from Yorkhill hospital to go home with my Mummy and Daddy!!

At three months old I took unwell, Mummy and Daddy took me to hospital where they did lots of tests and I was diagnosed with Pneumonia and Acute Bacterial Endocarditis - an infection on the tricuspid valve in my heart.

I was taken by ambulance to Glasgow to get looked after by paediatric cardiologists in the new Royal Hospital for Children. I had at least one new cannula inserted nearly every day as they would stop working, but I needed the medicine to get better. After a few days to build up my strength I went to theatre and was put under general anaesthetic so my consultant could put in a Hickman line. This is a small catheter that goes in to a vein near my collar bone. The Infection Control Team said I would need a total of 6 weeks of IV antibiotics to treat the infection on my heart valve.

During my time in Glasgow I had several scans done of my heart and countless blood tests. After what seemed like an age, the doctors were then happy enough with my progress and I was stable enough that I could return to Raigmore hospital, where I could be closer to home. I still have half of my treatment to complete but each day is a day closer to getting home with my Mummy and Daddy.

During both admissions while I was being cared for by doctors and nurses in Glasgow, Ronald McDonald House looked after my Mummy and Daddy; less than 10 minutes away from my bedside. They gave my parents somewhere secure to stay where they could cook, sleep and wash for NO cost.


Ronald McDonald is a charity that survives on donations and provides families with a 'home from home'. Having me poorly in hospital is tough enough without having the added stress and financial hardship of being away from home and work for a long period of time.


This next chapter is written my Mummy:
Our hearts are broken and our world has been turned upside down again.

Yesterday morning we were told that the 'vegetation' that is on Layla's heart valve has increased in size and also become mobile. This means that if it breaks off and travels to another part of her body, a vessel could block and cause a stroke.

The said they weren't overly concerned but they wished for the doctors in Glasgow to share their opinion. The Cardiologist in Glasgow requested that she gets transferred to the Royal Hospital for Children so she is in the best hands if something does happen. The Special Care Unit from Edinburgh travelled up to collect her and then take her to Glasgow. While waiting for the Team to arrive we were in HDU where she was closely monitored and had a continuous infusion of Heparin to thin her blood for precaution along with her regular antibiotics. It was then decided that the safest way to transfer was by helicopter, a brand new one which had never taken a patient before! We both had to go by car down the road once Layla was taken to the airport.

This morning one of the staff members who took Layla in the helicopter brought her a wee teddy in and to see how she was doing! Layla seems quite taken by her new companion.

Although Layla appears well to look at, she's really poorly. She seems none the wiser, still laughing and smiling. Such a fighter.

I really hope that we get answers to all our questions, I don't understand why this has happened to our perfect and precious baby girl.

Please help me to say thank you to such a wonderful charity.Thanks for taking the time to visit my JustGiving page.

Donating through JustGiving is simple, fast and totally secure. Your details are safe with JustGiving – they’ll never sell them on or send unwanted emails. Once you donate, they’ll send your money directly to the charity. So it’s the most efficient way to donate – saving time and cutting costs for the charity

Ronald McDonald House Glasgow is a small independent Scottish charity that provides free ‘home away from home’ accommodation for families who have seriously sick children in hospital. The House costs in the region of £660,000 per year to run, we truly value your support to keep the house running.