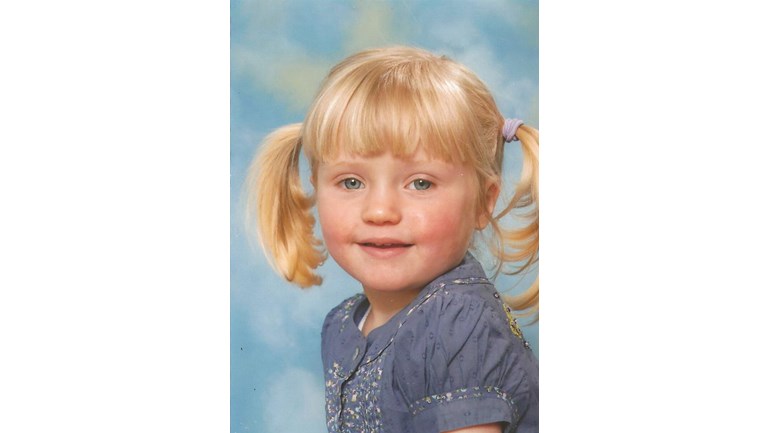 We undertake critical brain tumour research to improve survival rates across the World.

My daughter Leah…..a very vivacious, loving, caring and sociable little girl.  She loved going to nursery, playing with her friends and reading to her dollies.  At weekends she raced around on her push bike, going to the park and visiting granny for chocolate.  She loved holidays in the caravan and was always interested in everything around her.

All your worries, moans and groans before that dreaded day, mean absolutely nothing the day you are told your daughter has a malignant brain tumour. That is the day my world came crashing down.  In February 2010 at the age of 3, Leah started to get intense headaches, sickness and loss of balance, a couple of days later she was diagnosed with Anaplastic Medullablastoma.  With a slim chance of survival she started a very intense treatment programme.  Surgery, followed by 4 cycles of nasty chemotherapy, stem cell harvest, 44 sessions of radiotherapy under general anaesthetic, high dose chemotherapy in isolation and stem cell transplant.  Most of the first 9 months were spent in hospital, but Leah was truly amazing, she never lost her sparkle and had a will to get better like no other.  When the medical team said she should be tired, she was whizzing around the ward, playing with dollies, making funny hats for the doctors and nurses to wear, singing and laughing.  She never made a fuss about having treatment, she was an inspiration to many other parents, the problems only really started when it was time to have a wash or clean her teeth. Leah sailed through her treatment but unfortunately in November 2010 the cancer grew back and she started to lose her balance, by January 2011 she couldn’t walk, then lost the use in her hands, she started a palliative care course of treatment but by July 2011 lost her voice.  Still determined to go to nursery, she used my hands to do all the activities she loved so much. Unfortunately she contracted Sudamonas infection and shingles in September 2011 and from there on became very sleepy.  By the end of December 2011 she was barely opening her eyes at all and was unable to swallow.  Then suddenly at the end of March 2012 she woke up completely out of the blue.  I dashed around collecting all her Christmas toys together for her to play with thinking she’d soon fall back to sleep. But thankfully, she didn’t!

As this was so out of character it was decided that she’d have a scan.  Unbelievably the scan showed that since she was last scanned in July 2011 the cancer in her brain had shrunk significantly.  Why?  No one knows as Leah hadn’t had any form of treatment since July 2011!  It was a miracle!

In the following months Leah started to regain some health.  She was able to stay awake for long periods of time, smile, laugh, cry, hold her head up, be very cheeky, be naughty, blob her tongue out, swallow sips of juice, move her arms slighty and speak, she had a small voice most of the time but a very loud voice when she wanted.

We had a couple of scares after that, one in May 2012 when I was told she had hours to live due to brain stem damage.  The respiratory centre in her brain wasn’t functioning properly, her oxygen levels were too low and she was surviving on carbon dioxide, however, we took her home and again she got better all on her own.  Then another scare in August 2012 when the Omaya reservoir in her head which fed chemo to the CSF fluid in her brain became infected and had to be removed.  It was thought she wouldn’t handle the operation or the general anaesthetic and had a bed booked on intensive care, however, she was back on the ward with her eyes open breathing on her own within 3 hours.

Up until November 2012 Leah regained a quality of life, she enjoyed painting, baking, playing with her games, babies and shops in her toy room, she also enjoyed going out for a walk in her buggy or going for rides in the car and grandad’s van.  She even saw her 6th birthday which was remarkable as no one believed she’d see her 5th.  One of Leah’s wishes finally came true and she was able to attend a special school from September 2012 which she thoroughly enjoyed, she’d even started to regain movement in her legs and had started physio towards rehabilitation.  Then unfortunately on 7 November 2012 she fell ill.  It started with a cold and sickness, then her face went lopsided, she was scanned on 5 December and unfortunately the cancer in her brain had returned with a vengeance.  The tumour was huge, everyone was amazed at her ability to have achieved so much over the last few months when the tumour was growing at such a rapid pace.

Leah enjoyed the last month of her life as much as she possibly could, even though she became very sleepy again.  We baked together, went for lovely walks, read stories, played lots of games, visited santa at Sundown and even managed to go to her nursery christmas party where she sat on santa’s knee and saw her favourite magic man Mr Shiney.  She always had a cheeky smile on her face right until the end.

Leah deteriorated on New Years Eve and stopped breathing without a pulse for what seemed like a long time in the afternoon, but she was not ready to leave me then. She hung on until New Years Day and passed away in my arms on that lovely sunny morning.  After all her family and friends had been to have a cuddle and say their goodbyes she lay with a lovely sweet little smile on her face.

My little Leah…a fun filled, sparkly princess, who was more brave and courageous than anyone I have ever met.

Due to the excellent care and treatment at Queens Medical Centre Leah and I had the chance to spend an extra lovely 2 years and 10 months with each other that otherwise we wouldn’t have had. I lived those years not knowing what the future held, no one can truly understand how it feels to live each day with that kind of fear and sadness. That is why it is so important to raise the money needed for Prof Grundy and Prof Walker’s research.  We need to know why brain tumours occur, how to prevent them and treat them successfully.  A mother should never see her daughter go through this terrible illness, and should never have to hold her dying daughter in her arms. Leah should have the long and normal life she so deserves.

Thank you for reading Leah's story and I hope you are inspired by her bravery, your continued support and sponsorship is appreciated. Thank you.