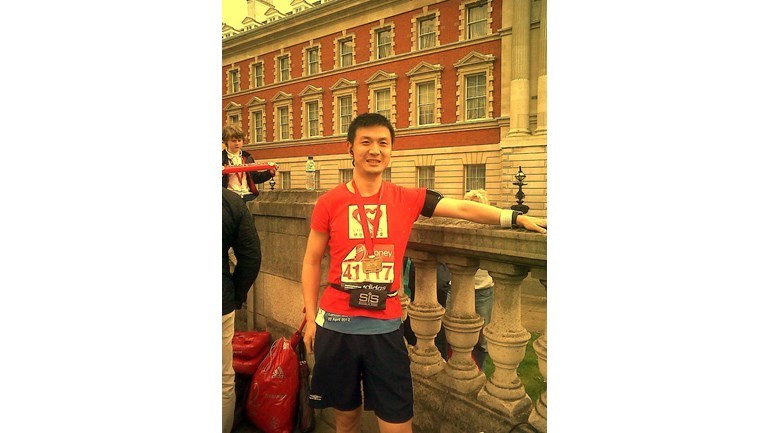 Now on Triathlon for CNF!

ChinaNext Foundation supports and fosters the development of civil society in China. Within the remit of existing law, we work with individuals and NGOs to develop awareness and skills necessary in the next generation Chinese citizens and encourage the participation of western youth in the process.

Update: See me in the news!

With fairness in mind, I thought that running was the most boring sport of all. The legs are souring, the heart is bumping, you gasp for air…all for absolutely no goal, no score, no cheering, no excitement. I thought whoever take part should find something better to do for their lives.

But here I am, signed myself up for a MARATHON, not knowing if I will collapse on the finish line (probably I will), to run a journey which takes half an hour to DRIVE at 50 miles/hour.

I think I am genuinely crazy.

But what Chinanext Foundation is set about to do is crazier. Whereas all I have to suffer for this marathon is six month of intensive training which included not less than one hour of all sorts of running EVERY DAY (yes every day!), the marathon they are set about running is not six months, but six years, or sixteen years, or even sixty years of intensive training, not for just one person, but for a significant proportion of the 1.3 billion population; The exercise is not only about the shins and lungs, but also about the hearts and minds. Most importantly, whereas I can choose NOT to do a marathon, I don’t think we have a choice when it comes to helping China run hers.

Because we are in the same planet, it’s 20% of our race. They are the second largest and the fastest growing economy. They produce the most carbon dioxide as well as every piece of our iPhones. They win the most Olympic gold. We just cannot avoid them. Whether you like it or not, our future is bound with theirs. We are in this together.

But this will be perhaps the most difficult marathon in our history. It took 300 years for the people in the West to realize that they are after all the master of their lives thus their communities and countries--something we’ve already taken for granted—this is still a relatively new idea in the Chinese society. Generations are deprived of their abilities to organize themselves, to manage their own communities and affairs, to think and act independently, because those are in power fear that such social organizations will jeopardize their grip on power.

This has to change. Not for abstract ideology but of the needs of both theirs and ours. A community 20 times larger than the UK, with a vibrant economy but without robust social infrastructure is dangerous in numerous ways. However difficult and however long it might take, we have to act.

That’s why I support The ChinaNext Foundation. They are training young volunteers for really cool project such as the "Free Lunch" movement, the Dream Corp, and the CMC (see their charity page). I want to go myself!

The actions are small, but over time, we will feel the difference. Our future is less risky for each of one pound we invest in shaping it. Just like 23 miles can be completed by the persistence of single steps, we should help the Chinanext Foundation, and the like of it, for stretching out the first steps.

ChinaNext Foundation supports and fosters the development of civil society in China. Within the remit of existing law, we work with individuals and NGOs to develop awareness and skills necessary in the next generation Chinese citizens and encourage the participation of western youth in the process.