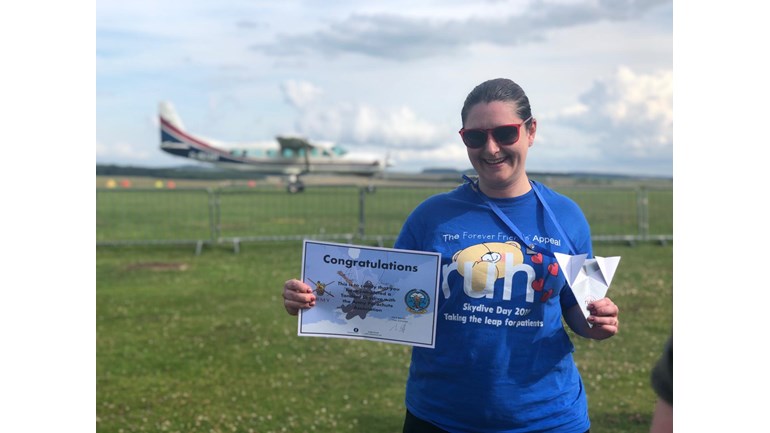 Thanks for taking the time to visit Lindsay's JustGiving page.

In July 2015, Lindsay organised a 'Wacky Wig Week', and many family members and friends generously donated money to The Forever Friends Appeal at the Royal United Hospital, Bath.  This money has gone to help provide a new Cancer Treatment Centre, which should be completed in 2020.

Lindsay's treatment continued until June 2017, when sadly, she died on 21st June, aged 60. She was very happy with the care she had received in Oncology, the Breast Care Unit and Radiotherapy.

Lindsay celebrated her 60th Birthday on 11th October 2016 by having a party at Compton Martin Village Hall. Ninety-seven of her family members and close friends attended. Instead of presents, many donated money to continue boosting The Forever Friends Appeal.

On 22nd July 2017, Lindsay's family and friends organised a service to celebrate her life. Over 300 people attended, with two choirs in attendance (Singaholics and Vox in Frox), led by choir leader Caroline Lowe, accompanied by Julie Payne on piano. This was held at St. Andrew's Church, Chew Magna, at 2.30pm, followed by refreshments at Chew Stoke Church Hall. Gift aid envelopes were left in the church for people to donate and a staggering £1512.06 (including gift aid) was generously donated (see offline donations). Many others have also kindly donated on this JustGiving' page.

To know Lindsay Game was to know defiance: seeing the strength, zeal and sheer determination that Lindsay demonstrated every day.  She lived her life to the full!

It is hoped that Lindsay's fund will continue to grow, and our new target of £10,000 has now been surpassed.  This is a notable achievement for someone whose original target was a mere £1,000. The last million pounds is quickly being realised, thanks to your help.

The new Cancer Treatment Centre will focus on an individualised and holistic approach to the treatment of cancer patients.  The RUH is building what it believes will be, the best cancer centre for a district hospital in the UK.

A staggering £1380.00 was raised in just 2 hours!! SO A HUGE THANK YOU TO EVERYONE INVOLVED

Lindsay's Pink Coffee Morning, organised by Sara Hindle and her Team, was a tremendous success with approximately 150 people attending. Everyone donned something PINK to show their support for Lindsay's chosen charity - The Forever Friends Appeal. With entertainment from Jiggidy from Bath (Rachel and John) and Mary Dowson's Hall Singers, the event went with a swing and was enjoyed by everyone attending! The atmosphere was amazing, some even said awesome! Again the gathering celebrated Lindsay's life, her tenacity and inspirational determination and support for others who might be in the same predicament, following a diagnosis of cancer. Alix Ramelli  (from The RUH Bath), spoke about the impact of the money raised through the Appeal. To conclude, everyone enjoyed listening to some of the chosen songs from Lindsay's Service of Celebration, followed by the raffle, organised by Mike Murrant. The raffle alone raised over £450.

THE FOREVER FRIENDS APPEAL - ANNUAL PARTNERS AWARDS RECEPTION Thursday 23rd November 2017. Nigel was invited to attend an Annual Awards Ceremony at The Royal National Hospital for Rheumatic Diseases, Bath. This was an evening to celebrate and thank selected supporters who had raised a minimum of £10,000. He was invited to take two guests with him - Hilary Knapp and Lindy Platt - see photos (who stayed with Lindsay on many occasions and for many hours when she was undergoing chemotherapy). The RUH Chief Executive, James Scott presented Nigel with a pink paperweight which was inscribed with the following words - 'In recognition of The Lindsay Game Forever Fund for raising £10,000 + towards the RUH Cancer Care Campaign. A loving tribute to a courageous, caring and warm hearted Lady' - see photo of paperweight. Nigel was delighted to also meet up with Jan Witt and Alix Ramelli, from the Forever Friends Appeal, - see photo

MEN OF CHEW CHRISTMAS PARTY SONGS to HIGH LITTLETON WI. Tuesday 5th December. The Men of Chew entertained a large group of ladies at their annual Christmas event.The chosen songs were: The Pirate King, Paddy on the railway, A day upon the sea, Always look on the bright side of life, Be glad this festive day, Little Saint Nick and the holly and the ivy. The ladies gave great applause demanding an encore, which had to be 'The Pirate King', complete with 'oh Arrs' and 'shiver me timbers'. A wave of cutlasses concluded the event. A very generous £30 was donated by the WI.

MEN OF CHEW PUB TOUR Friday 8th December. The RUH were delighted to learn that the Men of Chew were going to donate their entire collection to Lindsay's chosen charity. The tour began at The Red Lion, Bishop Sutton; followed by The Bear and Swan, Chew Magna; The Blue Bowl, West Harptree; The Ring O Bells, Hinton Blewitt; and finally The Litton, Litton. The men were received with rapturous applause at each of the pubs. They were so good that revellers dipped deep into their pockets donating an astounding £392.89. Many thanks to everyone for donating, to all the men taking part, to Caroline and Pat and to all those innkeepers that allowed this to happen.

Thank you for your continued support.

'LAST CHANCE HOTEL' - CHEW STOKE AM DRAM 15-17th MARCH 2018. Chew Stoke Am Dram put on 4 performances in March and the committee generously agreed to support Lindsay's chosen charity - The Forever Friends Appeal. They raised an astounding £2000 which included some of their reserve funds to make this huge amount.

Many thanks to Chew Stoke Am Dram and all those who contributed.

FLOWER TO REMEMBER EVENT at The RUH on Wednesday 12th September 2018. The Flower to Remember Event went extremely well. Unfortunately Nigel couldn't attend as he was at Lake Como, so the hospital planted a hyacinth bulb in memory of Lindsay on his behalf (see photo).

THE FOREVER FRIENDS APPEAL - ANNUAL PARTNERS RECEPTION Thursday 1st November 2018.
Nigel was again invited to attend the Annual Ceremony at St. Michael's Without Parish Church in Bath. He again took two guests with him - and asked Hilary Knapp and Lindy Platt - (who stayed with Lindsay on many occasions and for many hours when she was undergoing chemotherapy). (see photos)

WHAT A 'FAB' EVENING - this event really went with a swing, involving over 100 people dancing and swinging to Rachel Barrett and John's Pipley Ceilidh Band with Caller, Patrick from Bath. The evening began with a short slideshow of pics from when Lindsay first set up the fund-raising for the RUH Forever Friends in July 2015 (Wacky Wig Week) to the present time.  Immediately afterwards, the Pipley Ceilidh Band had everyone up dosey doe-ing and swinging their partners by the hand. At the first interval, Maggie Murphy put on an excellent 2 course supper and afterwards, Lindy, accompanied by John, sang three pieces, much to the appreciation of everyone. Heartfelt applause could be heard. More dancing took place, with a new rotation of friends and family members taking part. Mike Murrant then began the raffle which raised an astonishing £430! Generous prizes included 3 bottles of Champagne, Bombay Sapphire Gin, Courvoisier Brandy, a huge basket of Cadbury's Chocolate, veggie boxes, tokens etc.. a never ending stream of prizes... The magnificent Ceilidh Band concluded the dancing, followed by Nigel thanking all those persons who contributed, making the event such a positive success...

Special thanks to Andrew Tromans, Allen Marsh, Bob Samwell for helping Nigel put up the catering tent on the Thursday; Matt and Niamh, who travelled from Norfolk, for their help in setting up and being on door duty; Bob, for sorting out the lights and organising the slideshow; Bridget, Dave and Connie for sorting out bunting and manning the bar all evening with John Bone helping; Ollie, from Butcombe Brewery for supplying beer and Ashton Press cider at hugely discounted prices; Maggie Murphy for heavily discounting the cost of the delicious 2-course meal; All the friends who helped serve pudding; Sara Hindle (for collecting Raffle Prizes) and Mike Murrant for organising ticket sales etc; Thank you to all those who donated raffle prizes!!!; Nigel, Steph, Andrew, Bob, Dave and Connie for helping with the clearing up on the Sunday... Thanks also to The Chew Stoke Church Hall Committee for providing the hall free of charge!!

As a result (INCLUDING MANY DONATIONS) we raised £2226.00 (including Gift Aid).  Thank you so much everyone...

RUTH AND DHAVAL'S ENGAGEMENT PARTY AND RUTH'S 30th BIRTHDAY PARTY Saturday 20th April 2019 - Including a celebration of two families and cultures joining together. Ruth told all those gathered on this day, of her love for an inspirational special 'aunt' Lindsay, (who was Ruth's Goddaughter). Every day Ruth thinks of Lindsay and her positive spirit (see photo).

ALI WILKINSON'S SKYDIVE Sunday 7th July 2019 Ali bravely took the plunge and jumped out of an aeroplane at 13,000 feet over Netheravon airfield in Wiltshire. She was relieved to land in one piece, not going splat in front of her kid Sam! Ali misses her (fairy) Godmother Lindsay immensely and is staggered by everyone's generosity, raising £1037.00 -  WELL DONE ALI.

THE FOREVER FRIENDS APPEAL R.U.H. ANNUAL PARTNERS' RECEPTION 2019 Thursday 7th November 2019 - Nigel and 2 guests have again been invited to attend this Reception and he has invited Hilary and Lindy again (who kindly stayed with Lindsay through chemo) to join him, and to receive a certificate for this incredible amount. It's amazing to think that we've now reached £25K, when Lindsay's original target in 2015 was a mere £1K! Thank you so much everyone for all your support.

The Forever Friends Appeal is the charity of the Royal United Hospitals Bath (RUH). We fund additional equipment, research and innovations, as well as finishing touches and ‘extras’ that complement the existing high quality care at the Hospitals. Help make a real difference at the RUH today!