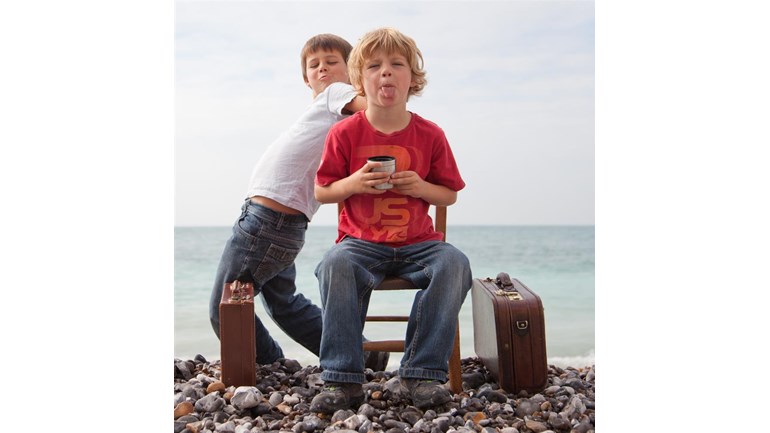 On September 27th my two sons, Dow and Orly, now at the tender ages of 14 and 11, are set to climb Mount Kilimanjaro (I'll be there too, somewhere in the background).  As a travel writer, many times, I've passed beneath the shadow of Mount Kilimanjaro.  At 5895m, it is the highest freestanding mountain in the world, but always it's remained something illusive and otherworldly, a mirage in the clouds.  Since they were very little, I've promised the boys that one day we would climb it together and finally we are going to.   As we do so we'll be rising money for War Child - a charity close to our hearts that strives for a world in which no child's life is torn apart by war.  Less than 3% of humanitarian aid is spent on child protection in conflict-affected regions.  By making a donation, you will be making a difference to thousands of kids whose lives have been turned upside-down by conflict. You’ll be helping them receive the care and support they need to overcome the traumas they’ve suffered, and you'll transform their futures for the better.

Below is my attempt to tug at your heart strings. This is based on a true story, from a while ago.  Please share.

Small boy. Stands in a clearing, on the fringes of a rowdy crowd. Stick-like legs and stick-like arms and a rotund belly, smooth and hard as a pebble, that protrudes beneath his worn green T shirt, which is all that he wears.
Three, four years of age. No more. Cow brown eyes, bright beneath long lashes. Bright with tears that spill. He does not brush them away. Simply stands, shudders, sucks at his fourth finger.
And no ones knows where he comes from. For he does not speak. Will not speak. Cannot speak.
Small boy. Clutching in his hand a handkerchief. Just one handkerchief, whiter than you’d think in the dirt and the mire and the dust strewn wind. And inside a tiny cluster of the things that are his. A button. A chipped clay pipe. A blue rubber ball, chewed and tooth-marked as if one day he’d been hungry.
And no one knows who he belongs to. For he does not speak. Will not speak. Cannot speak.
There was a night. He, in the dark of a corner. Huddled knees to chest. Made tight into a triangle. The sound of his Ma. His Pa. His brothers and his sisters. Screaming out their last words. No. Please, No. As the clubs came down. And down. And down. No. Dear God. No.
Small boy, hands over ears. Eyes tight shut. Mouth like a clam. But still he hears them. Until the very end. A long time coming. Longer than you’d think.
Gone then, that life of skip and jump. Of work and toil and then play if you must. In the brachiaria grasses. Gone the, “We love you’s. Small boy of ours. Truly we do.” That time when goat bells rang the evenings in. When the light flamed red. The shadows fell warm and long.         Now all is dark. Just the tick of cicadas. The wind in the jacaranda trees. Woodsmoke running low from the still burning fire. And later the bright sun rising like a hot metal spoon. And later still, passing nights with a tilted moon. And he, small boy. Alone beneath it.
He does not speak. Will not speak. Cannot speak. And no one knows his name. And no one ever will…..And time is running out. For a day, a mere month away, when he will be found. Too late. Curled in the bushes, tight as a triangle, knees to chest. Clutching that handkerchief in his hand. Seemingly sleeping. But not to wake. No. Not this small boy. Three, four years of age. Sleeping now, not to wake.

Unless…unless, you kind people, this time, this day, help us find him, that boy, who has no name. So that he might skip and jump again.

Charity Registration No. 1071659
Find out more about charity fundraising