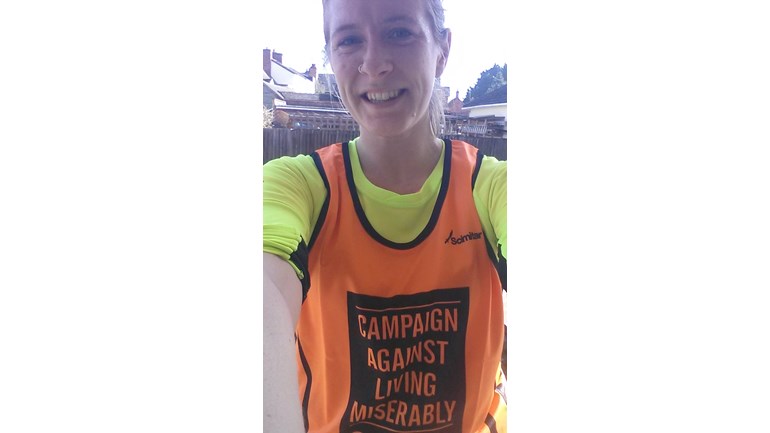 Thanks for taking the time to visit my JustGiving page. As many of you will probably know (because I am guilty of spamming your Facebook timelines and Twitter feeds and just generally going on about running ALL THE TIME. Sorry.), I am running a lot at the moment.

I have been running on and off for about three or four years now, but it's only recently that I have started to genuinely enjoy it, so much so that my New Year's Resolution for 2015 is to run 1000 miles over the course of the year, and to complete one race/running event per month. You can see how I'm doing by visiting my blog at www.lisas5x50challenge.wordpress.com!

I was going to do this challenge just for fun and fitness, but then something happened in January that gave me the idea to raise some money and awareness for what I believe is a very important charity: CALM. On the 22nd January, my Grandad, Frank Twocock, died. Understandably and unsurprisingly, when I tell people that my 86-year old Grandad passed away, they put on their "sympathy face" and say comforting things about him having had a good innings, an' all that. Sadly, Grandad didn't die of old age; unfortunately, for reasons known only to himself, my Grandad decided to take his own life that day.

I first became aware of CALM (Campaign Against Living Miserably) around the time that the actor Robin Williams committed suicide. A DJ on the radio station I was listening to made a really emotional speech about the problem of suicide in men. I was completely shocked to learn that suicide is the biggest killer of young men under the age of 45, and that of all suicides in the UK, 78% of them are male.

In an effort to reduce male suicide rates in the UK, CALM works with and for men of any age who are struggling with stress and mental health issues. They provide information, a helpline, support networks in London and Liverpool called 'CALMzones', and campaign for changes in policy and practice to ensure that people who are bereaved or affected by suicide get the right help and support they need. CALM wants to see a culture change so that people affected by stress and mental health issues, especially young men, feel able to seek help when they need it.

If you have a few spare pennies, I'd be really grateful if you could make a small donation to this really worthy cause. Donating through JustGiving is simple, fast and totally secure. Your details are safe with JustGiving – they’ll never sell them on or send unwanted emails. Once you donate, they’ll send your money directly to the charity. So it’s the most efficient way to donate – saving time and cutting costs for the charity.