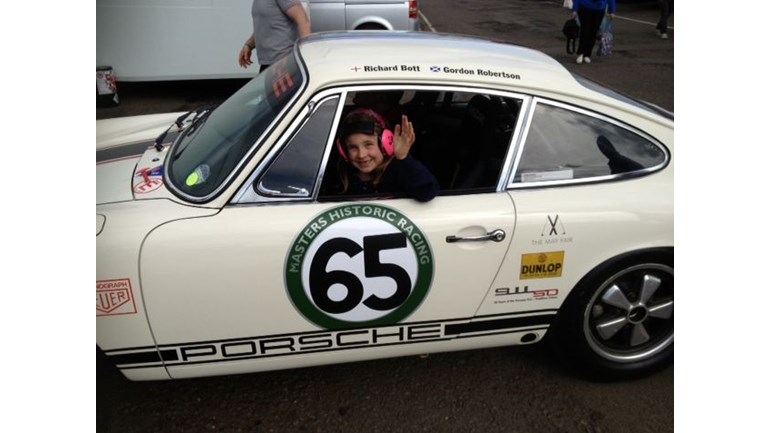 We transform lives locally and globally through the creation, sharing and application of knowledge. Through excelling in teaching and research; contributing to the social, economic and cultural life of Scotland and the wider world; shaping the future by solving important real-world problems.

Gordon Robertson, Chief Driving Consultant at the Porsche Experience Centre, Silverstone, has had a tough 18 months because of cancer. Determination to create something positive from the negative has inspired him to head a charity appeal that will not only raise funds for one of the UK's leading cancer research facilities, but will also celebrate the 50 Anniversary of the most iconic Porsche of them all - the 911.

"2012 started badly, In January I was diagnosed with medullary thyroid cancer, a form of the disease caused by a genetic abnormality. Following a seven-hour neck operation and six weeks of intensive radio therapy, however, I was back on the road again. Later in the year and following further investigation, it was discovered that, sadly, our then five year old daughter Lucy carried the same genetic abnormality as me, meaning that thyroid removal was advised to minimise the chance of her developing the disease in the future. I cannot begin to describe the agony of discovering that I had unknowingly passed this gene onto my 'wee Princess'. But, in true Lucy style, she tackled the operation with a determined smile, and thankfully she is now fighting fit and desperately wants to become a nurse!

"I wanted to say 'thank you' to the extraordinary people who have helped us along the way. To do this, me and the team at Porsche GB in Reading have planned 'The Long Way Doune: Porsche 911 50th Anniversary Charity UK Tour'. With Lucy in the passenger seat,from July 8-10th  I will pilot the 1965 Porsche 911 Project 50 race car from our home in Doune, Perthshire, to Goodwood Racing Circuit in Hampshire, visiting nine of the UK's finest racing circuits in three days. We will be joined by various VIP guest drivers along the way making this a truly remarkable journey.

When daddy was made he had a faulty gene and I was given the same one when I was made, so a nice man called Dr Dave Smith put dots on my neck which was tickly- then he took my thyroid out. After my operation I couldn't talk but after 5 minutes I had 2 lunches !

I feel hundreds better now but still get blood taken to make sure I don't need another operation like my daddy.

The money we raise will be donated to the Ninewells Cancer Campaign, part of the University of Dundee's research centre. Lucy was treated at Ninewells and its team lead the field in genetic cancer research, so we definitely feel like we owe a debt of gratitude. So, please dig deep and help support us however you can."

We transform lives locally and globally through the creation, sharing and application of knowledge. Through excelling in teaching and research; contributing to the social, economic and cultural life of Scotland and the wider world; shaping the future by solving important real-world problems.