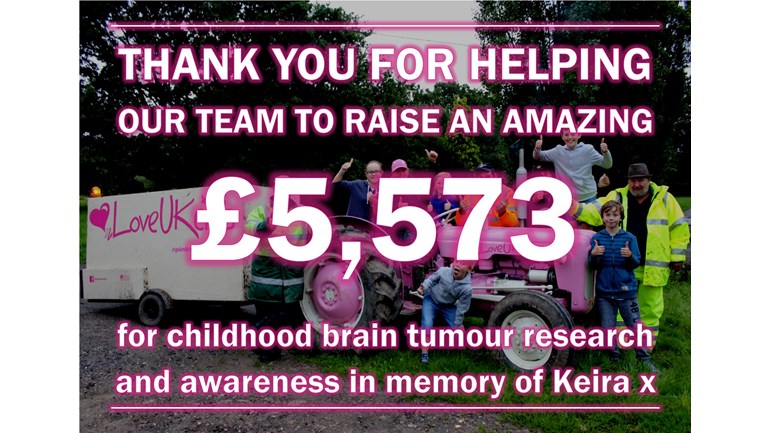 Driving 700 miles via 3 country shows for Children’s Brain Tumour Research Centre - University of Nottingham because our kids deserve a voice against brain cancer!

We undertake critical brain tumour research to improve survival rates across the World.

On the 10th of August 2015, 3 members of the LoveUKeira team will set off on an epic 700 mile journey on 3 vintage tractors with a combined age of over 160 years (the tractors, not the team!). After months of preparation and restoration we will have a 1961 Fordson Super Major and two 1958 Fordson Dextas towing 3 beautiful vintage showman’s wagons from the 1920’s era. Starting in Crawley, West Sussex the team will spend 3 weeks on the road across the South of England to raise awareness and vital funds for research, hosting several evening events and displaying their magnificent machines at 3 popular country shows. Further details of the event can be found at www.loveukeira.co.uk and the team can be sponsored at www.justgiving.com/loveukeiraroadtrip or by texting KEIR70 £3 to 70070 (or any amount between £1 and £10).

Team leader Shane Portman was born and raised on and around farms in Devon and Dorset. Shane’s Grandad was a ploughman after leaving the army in the early fifties. He started working with horses but eventually moved on to tractors, his first being a 1948 Fordson E27N. He continued to work up until the late 1970s. Shane’s Father was a dairyman and at the age of 13 the family moved to Surrey, where they have a small holding of around 25 acres and keep chickens and a few sheep. Shane and his family, including uncles and cousins have around 20 vintage tractors and implements including his Grandad’s Fordson E27N, his Massey Harris 745 and his pride and joy, a 1932 Aveling & Porter steam roller. Every year Shane, his family and friends run their magnificent machines out on the remaining 130 acres of the farm.

Shane is accompanied on the road trip by his wife Donna (who insisted on the bright pink paint job for her tractor in Keira’s honour!) and his good friend, Patrick Holden, a contract tractor driver.