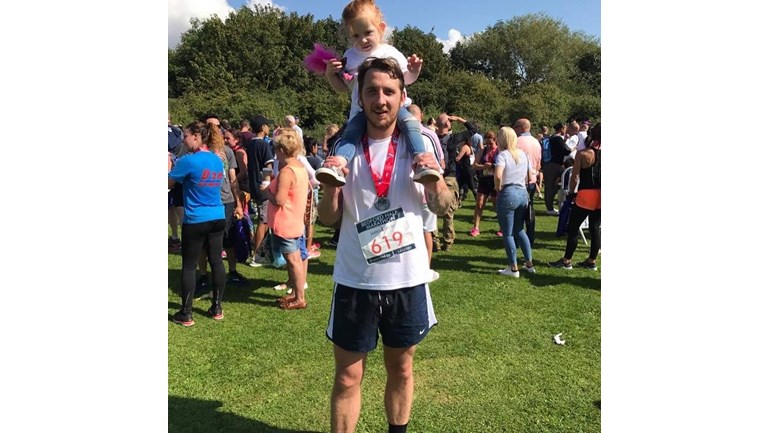 Luke's Bedford half marathon page for The sick children's trust

As many people that are close to me may know, 2 years ago myself and Robyn had the surprise of our lives when we found out Robyn was pregnant and in labour the very same day. we where blessed to bring our little Daisy pearl in the world a few hours later.

Unfortunately 2 weeks later she became very poorly and was rushed into resus at Addenbrooks hospital, later that day she was diagnosed  with 3 holes in her heart and a number of other slightly less concerning issues by the fantastic cardiac consultant Dr Yogen Singh.

The holes in her heart were causing too much blood to flow into her lungs meaning Daisy was unable to use her lungs to their full capacity meaning Daisy found breathing very difficult and energy sapping.

She was very close to an emergency transfer to great ormond street hospital for life saving surgery however the brilliant staff at Addenbrooks were able to stabilize Daisy and keep her under their care in PICU.

While Daisy was in PICU, Robyn and I were gratefully able to stay at Acorn house. A housing accommodation run by The sick children's trust charity just a minute or 2 away from Daisy's bed side.

Daisy was in and out of hospital and PICU for about 2 months until she took a turn for the worse again and ended up needing an emergency transfer to Great Ormond Street via the CATS team. where she had her first of 2 open heart surgeries.

Daisy stayed at GOSH for nearly 2 weeks until she was fit and healthy enough for surgery, her first round of surgery was to fit a PA band around her artery to slow to flow of blood pumping into her lungs.

She recovered from this in quick time and was able to come back to Addenbrook's within a further 2 weeks then she really started to make progress. we where still frequent visitors to the amazing C3 ward at Addenbrooks until the opportunity arose that Daisy was able to have her second round of heart surgery.

This time round she was well enough for us to make our own way down to GOSH however once we got to the hospital for the pre-op the surgeons decided she wasnt quite well enough to undergo the operation without possible problems with recovery, we where sent back home for a couple of weeks until the time came that Daisy was fit and everything was in place for the procedure to go ahead.

We again made our way to the hospital for pre op for Daisy to successfully pass all the tests and was able  under go surgery.

It was surgery day, the day our little girl got to get the surgery she so desperately needed. 2 of us got to the hospital in a nervy anticipation. the smallest of us was just starting another normal smily day.

We waited and waited for Daisy's name to be called only for us to be told it might not go ahead due to the surgeon that was pencilled in to perform the op had actually been called in the night before to perform life saving urgent surgery on a very poorly child. we stayed in the pre op waiting ward for a number of hours before we finally were told that great ormond street hospital had been able to get hold of a surgeon.

Victor Tsang a Consultant cardic surgeon was called in to perform the surgery, we where told Daisy was in the best hands possible. Daisy was in surgery for nearly 8 hours.

this was the longest day of ours and all of our family lives.  we finally got the call to say she was out and in recovery and everything went well.

While Daisy was in PICU recovery, Robyn and i where able to stay in Guilford street house, another housing accommodation provided by The sick children's trust. Daisy made a great recovery and was able to come home after just 1 week of recovery.

Since then Daisy has had significantly less trips to Hospital and even less over night stays in C3.

There are so many charity's i could run for that has helped the three of us along the way but the sick children's trust where able to keep me and Robyn so close to Daisy's bed side while we needed her the most and for that reason id like you to help me raise the money for this charity to be able to continue to provide the much needed support to the family affected by their children's illness.