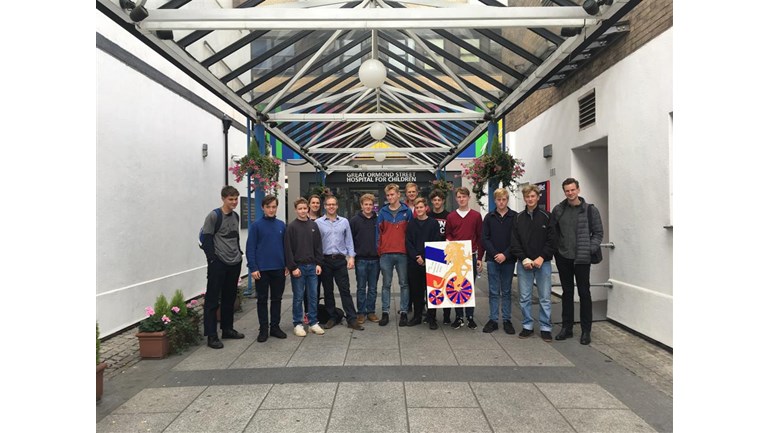 11 of us will cycle 777km from Lyon - Lyon, France for Great Ormond Street Hospital Children's Charity because we want to support GOSH and its incredible work

Lyon House at Sherborne School in Dorset, supports GOSH, inspired by the profound effect it has had on three of us. Here are our stories:

Hugo's sister, Ottilie, has been treated by GOSH for over ten years. At two and a half she was diagnosed with hypophosphatemic rickets or 'wonky legs' as she describes them! It's a very rare condition meaning that her kidneys don't work properly, which affects her bone growth. She will always be small and has already undergone major surgery on her legs and her knees with extreme bravery. Ottilie's cheerfulness, her lack of self pity and her determination to join in every joy life offers, fills us with pride and admiration. We are cycling for Ottilie and others like her.

On 14 December 2009, my brother Sebastian died from a streptococcal infection. Part of the reason he couldn't fight what is usually a sore throat was because he suffered from two incredibly rare genetic conditions, one of which is called Pallister Killian Syndrome.  I was 9 and my brother (Ollie, who is also cycling) and sister were 8 and 6 respectively. The work and support that Great Ormond Street Hospital provides to the relatives of children with varying disabilities and illnesses is something that I and my family have witnessed first hand. The impact they can have on a family's well-being can't be overstated and we are now in a position to give back to the charity that supported us so much while helping us to care and provide for Sebastian.

In the early years before we contacted Great Ormond Street Hospital, it was always difficult for doctors to ascertain the level of my brother's disability as we had no definitive diagnosis of Sebastian's condition. The advice we received could be inconsistent and trying to decide how best to care for my brother became a difficult task, especially for my parents. When we made contact with the hospital they instantly got to work on a diagnosis and were able to determine that my brother had both Pallister Killian and another rare genetic condition that has only been seen once before. It was incredible how they produced a diagnosis and then conveyed the implications of Sebastian's condition to my family. This was no easy task and telling us that Sebastian would never be able to walk or talk was such a difficult moment, undoubtedly made easier by the support and humanity they showed us throughout.

In 2014 I decided to nominate Great Ormond Street Hospital Children's Charity as Lyon's House Charity and now, almost three years later, we are preparing for the Lyon to Lyon bike ride. The money that we raise from this event and the many fundraisers leading up to it will go directly towards the children's hospital and help medical research into rare genetic conditions such as my brother's as well as sustain the incredible work of the nurses and doctors who provide emotional support and medical care to thousands of families every year. My family is extremely grateful for the help we received and we hope you can help us give back to such a worthwhile cause. Thank you.