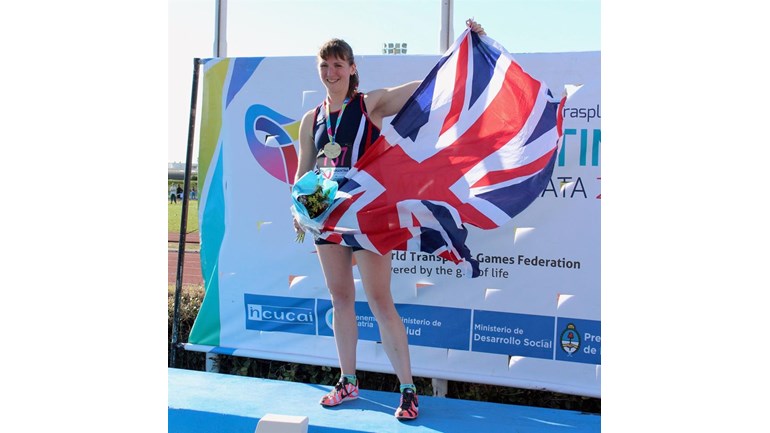 I am representing Great Britain in athletics for Transplant Sport UK because I had a life saving bone marrow transplant.

In 2008 I was running 30km a week, eating healthy, keeping slim, and planning my wedding. Within a fortnight I couldn't walk up a flight of stairs without losing my breath and in July 2009 I had a bone marrow transplant to cure a rare blood disorder.

Unfortunately, my only brother was not a match for me, so the Anthony Nolan Trust put out a worldwide search to find someone with my specific genetics, and a young man from America donated his stem cells to save my life. After a gruelling first 6 months, I was able to return to work and exercise, gradually regaining the fitness I'd had before the illness and chemo... and eventually surpassing "the old me"!

I've competed in the past four British Transplant Games, winning gold medals in the Mini Marathon (as well as a trophy for first woman), 1500m, 800m, 400m and silver in the 200m. I attended my first World Transplant Games in Argentina in 2015, earning a clean sweep of six goal medals and a new World Record in the 1500m. I'm so proud to have been selected to represent Great Britain at the World Transplant Games again in Malaga and I'm hoping to repeat my success in the Spanish heat!

Though the World Transplant Games are an IOC event, funding is very limited so athletes must fundraise to cover the extensive transportation, accommodation and training costs, which is where you come in! I am raising funds to cover my expenses associated with attending the World Transplant Games in Malaga, Spain. Any surplus funds will go towards the Transplant Sport UK Management Team (including physios and coaches) who give up their time to support the team.

Transplant Sport is a registered charity whose main aim is to raise awareness of the need for organ donation. We organise sports and social events for transplant recipients to improve health and well being whilst actively promoting organ donation.

Charity Registration No. 1127314
Find out more about charity fundraising