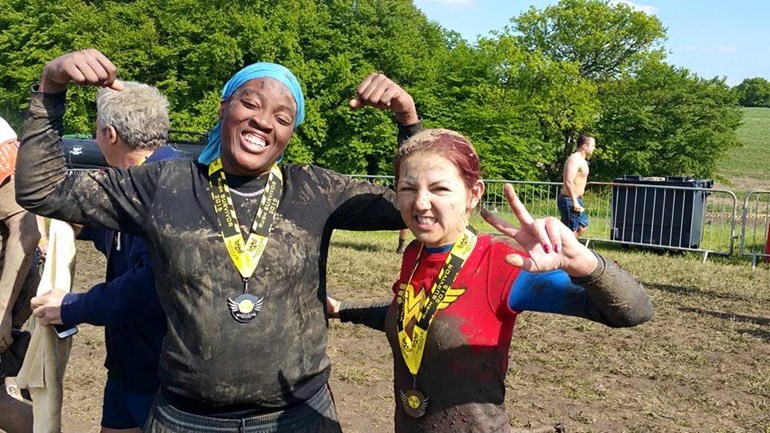 Isle of Wight 54K + Nuclear Rush 12K for World Land Trust because I want to save our airfilters and water factories!

Well, what a crazy 2 weeks it has been!

Thank you everyone for your donations! It's fantastic that so many you have donated, friends, family, random strangers! Not only that, but given me physical, mental, moral support along with your donations.

The Isle of Wight 54km Half Island walk was emotional to say the least. My plan was to walk by myself as a mental challenge... It was that indeed. I met amazing people along the way. My plan was to finish the walk before nightfall. As it goes, things don't always go to plan. My worst fear (from mountain hikes prior) was realized when the sun started to go down. I got to 47km and met a girl, who almost took us both down the side of the eroding cliffs of the Isle of Wight. She was with a couple of other guys who had just joined her. They told me she was deaf. Later I found out that she also had Cerebral Palsy. As the tiredness hit, she was extremely unstable on her feet and her coordination was close to none. We couldn't believe she was on her own all this time. In a nutshell the next few km were more than hairy. We were in the dark guiding her, holding onto her as she fell and kept drifting towards the side of the cliff. We had to stop and call the Emergency hotline but still ended up taking her along steep, slippery slopes and cliffs to get her to the ride back to the half way point of the island. The end seems far and slow. But we all did it and got our medals with no one hurt, maybe slightly shaken and angry with the organizers.
The walk was beautiful, the rugged cliffs and undisturbed nature was more than a reward and confirmation for my cause - The World Land Trust.

The second challenge - Nuclear Rush - 50 obstacles around a 12km muddy farm track this weekend in Brentwood, Essex was an even greater fear as 50 turned to 85!! Muddy banks and trenches, high walls, falls into water (eeek monkeys don't swim!!) monkey bars, crawling under nets...85 times!!!! We managed to complete somewhere around 60-65 which I am more than happy with and corespondent to my original challenge for myself.  I faced my other fear, water, when told the zip line drop into the pond would be fine at 4ft. It. Was. NOT!! Almost drowning, I saw the nature of people, who came to my rescue in lightning speed. For a lot of people, this was not just a challenge to make a certain time but also about working together.

My team, Man's Orangs made it all the more enjoyable and manageable! It was such a great day!

Working together is the only way to make any kind of difference....

The money that is given to World Land Trust, in my estimation, has more effect on the wild world than almost anything I can think of.”

Once upon a time – 2 years ago – I decided to relive my youth and go backpacking – I was 20 again! So after ‘discovering myself’ in south-east Asia I had only one wish to end my trip: to see one of those gentle orange creatures, an Orang-utan, in it’s natural environment.

The orang-utan (meaning “person of the forest”) is our closest living relative sharing 96.4% of our DNA. Today this gentle species can only be found in the rainforests of Sumatra (Indonesia) and Borneo (Malaysia). Their numbers have drastically declined due to poaching, animal trafficking and their biggest threat – the deforestation for the farming of palm oil.

And so chasing my dream of finding one, I dragged my travel buddy Natalie along for the ride. Unusually I couldn't sleep on our very long, bumpy car ride to  Gunung Leuser National Park, and so I stared out of the window. Neat artificial forests of palms lined the bumpy roads, both sides, where primary and secondary rainforest once stood. Bump after bump, hour after hour, row after row.

The next morning began with a breath-taking sunrise over the small Sumatran river village after which our trek began. We battled humidity, daytime mosquito feasts (the menu being us), exhaustion and knee pain – after all it had been 4 months of treks and 20kg of backpack, I was not 20 years old any more! Our first sighting was incredible. A mother orang and her baby swung above us, snacking on sugar cane. The young one, possibly teething, would take every opportunity to itch his gums on the branches. I was on cloud 9, no cloud 11!! Definitely not what I expected, we were so close!! I later found out why. I could go home now and the happiest person alive!

Walking up the hills in pure delirious bliss, it was time for another encounter. We stopped to admire the view of the forest when Natalie proclaimed, “wouldn’t it be perfect if an Orang came out from the trees right now?!!” Queue laughing, when, perfectly timed Jackie appeared out of nowhere and going forward fast. Jackie was on a mission. She had a young one and she wanted food. People meant food. I later learned that Jackie was a semi wild Orang. This meant she was a rescue ape and was used to humans. Especially tourists and tour guides.

We gave Jackie some fruits but this was not enough. Our two guides did warn us that the apes may feel the need to hold our hand. How cute we thought! We started to leave the clearing when Jackie decided to take Natalie’s hand and turn her direction 360 degrees by carefully switching hands as to not lose grip of her hostage. Jackie wanted more food and she knew we had it. No matter how much coaxing was thrown her way, any interference only tightened her grip. She held on, until her and youngster were sufficiently fed. The little one even gave us dirty looks as we laughed and joked, perhaps too loudly for his liking.

After a staring competition with the youngster, I was astounded how human his eyes and expressions were. Happily fed, he started misbehaving like a toddler. Waving a stick around, bashing it into the ground menacingly with almost the uncoordinated movements of a toddler. Soon getting bored of that, he started climbing and swinging around the trees above. 30 minutes later, Jackie was fed too and our beautiful order was over. I could not believe what had just occurred.

A strange mixture of feelings, a little shaken, unharmed but totally happy! We later learned that this was not exactly eco-tourism! We hadn’t done our research. These diminishing habitats means that their natural food source is just not enough. They now rely on the food platforms set out in the reserves and even extras from tourists. This persistent human contact not only puts them at risk of disease (even the simple flu can wipe out an entire population) but also allows the apes to somewhat feel ‘safe’ around humans putting them in danger from poachers and loggers.

Their habitat has alarmingly decreased by 80% in the last 20 years. If this continues they will only be found in books, films and zoos in less than 30 years. Large companies are destroying huge areas of forest for the very lucrative palm oil industry with no regard for the consequences to the wild. Why? Because we are humans! As self-appointed rulers of this planet, we take and take and take because there will always be more. We need to now take care!

This is just my story. Just one rainforest story. Just one valuable creature that is due to disappear if we do not act. It’s not just about today. We have to think about the future.

What am I prepared to do?

In aid of this, I have decided to sign up for two demanding challenges to raise as much money as possible for my chosen charity – The World Land Trust.

May 2 – I will be ‘jalking’ (jogging/walking) 54K (33.5 miles) in the Ultra Challenge around the Isle of Wight. This event will not only be mentally and physically exhausting as the majority of it will be across the Downs and steep Country Roads, but also psychologically demanding as I will be participating in this event alone. After completing a 25K walk in London January (on the flat), I know this will be no easy feat.

May 16 – Secondly and more unnervingly, the 12K Nuclear Rush, where I’ll be fighting through 50 torturous obstacles with plenty of mud as a bonus. The aim of this is to finish really, with no broken bones or teeth! The Death Slide (yikes!) with a drop into 6ft deep water will prove particularly challenging for me. Thankfully on this occasion, I will have my team’s help, Man’s Orangs, it’s either that or learn to swim.

WLT is an international conservation organisation that acts directly to save rainforest and other wilderness habitats. WLT works around the world with local partner organisations to purchase land and create permanent reserve areas.

In Borneo, there are already 74,000 acres of protected land but these reserves are fragmented – like missing pieces of the jigsaw puzzle! WLT tries to connect these in order to widen area reserves and safeguard from the threat of expansion of palm oil plantations. Essentially they buy land and protect it. Forever.

Borneo, Orangs and beyond…

Beyond Borneo and Orangs, species are being eradicated and habitats destroyed all over the world. The WLT have lead projects in countries like Armenia, Bolivia, Brazil, Columbia, Ecuador, India, Kenya, Mexico, UK and many more. Your support will go directly to the most urgently needed areas which will benefit all types of primates, jaguars, leopards, elephants, birds and many more.

The health of our rainforests is in our hands. Their health eventually equates to the health of our species. It is time to take responsibility and look after what is ours. These are our air filters and water factories – we cannot live without them!

The biggest fight we have to date is saving ourselves from ourselves. We need to act now!

Thank you for taking the time to read this. I am hoping to raise a minimum of £400. Your donations will not only support a cause very close to my heart, but it will also help spur me on during any low points I have during these challenges.