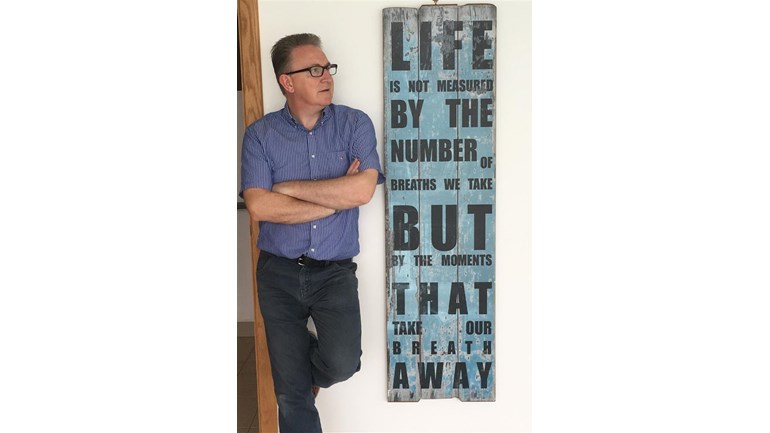 In memory of Kevin Kirkwood

For anyone wishing to donate in Kevin's memory for City Hospice because of the exceptional care and support we received.

In Kevin's own words:

I would like to think I have fought a long and brave battle against the big C, far exceeding my original life expectancy. When I was first diagnosed my children, Elin and Alastair, were only 6 and 3. Not fair I said, we have such great plans. I wanted to experience as many good times with my family as I could. Watch them blossom and grow. Give them the benefit of my wisdom and have them learn from my mistakes. This I determined to do to the best of my ability but in a much shorter time frame. So
although I knew from the outset I would never win the war I was determined to win as many battles as I could along the way and stick around for as long as possible. This I duly did, overcoming numerous surgeries, chemotherapies and radiotherapy. Despite being a self confessed “grumpy middle aged sod” with a sense of humour drier than dry Jock McDry on an exceedingly dry day, I don’t think I complained much about my predicament, about my diagnosis, prognosis, side
effects etc. I just spent my time continuing to moan about everything else that was wrong in the world! Looking back I think we succeeded.

Not being one blessed with too much original thought I will sign off by adapting Terry Pratchetts final tweets, which I found very poignant and funny at the time of his passing:

“AT LAST, KEVIN, WE MUST WALK TOGETHER. BUT IF YOU ARE GOING TO TRY AND BE FUNNY, ALBEIT AT A MOST INOPPORTUNE OF TIMES, AT LEAST MAKE IT AMUSING”

“I was just thinking how well you look Mr Death, have you been ill recently? Given the circumstances I was rather inclined to give you a nasty look. But I see you already have one.”

City Hospice is Cardiff's local hospice, providing free consultant led community specialist palliative care to those facing cancer and other life threatening illnesses in Cardiff. We exist to help those suffering from cancer, their families and carers at a most difficult period in their lives.

Charity Registration No. 1023311
Find out more about charity fundraising