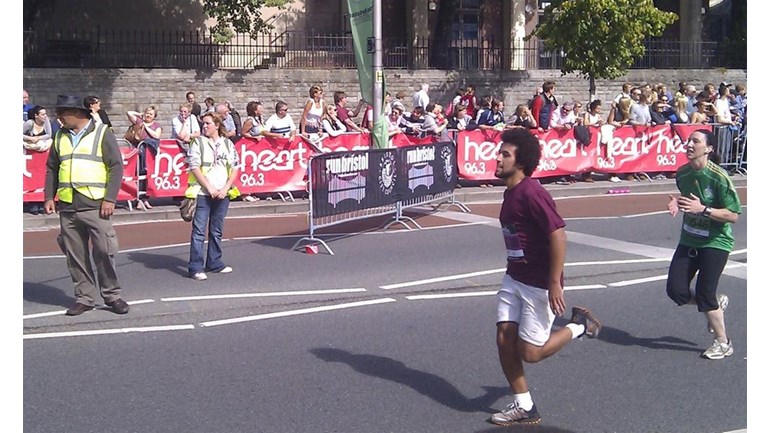 Fundraising for Classics for All XX

Classics for All XX

Classics for All is an education charity committed to funding projects that embed the teaching of Classics within the state education system. We do not receive any public funding but rely on the generosity of our donors to give students opportunities across the country. Thank you for your support.

Thanks for taking the time to visit our JustGiving page.  On 11th September 2011 Colin Elliott, Loriel Anderson, Qussei Buhidma, Leo Borrie and Jessica Priestley ran the Bristol Half Marathon to mark the 2,500 year anniversary* of the legendary first marathon in 490 BC.   We were kindly sponsored by Bristol's Institute of Greece, Rome and the Classical Tradition.  We hope to raise £2,500 for the charity Classics for All - this fundraising page will remain open until December 2011.

Classics for All is a charity which is bringing Classics to state schools throughout the UK.  It supports initiatives that embed Classics sustainably, productively and to the highest standard in the state school curriculum, and aims to open more pupils' eyes to some of the fascinating and richly rewarding insights that the study of Classics brings (such as the story behind the Marathon run!)  Please consider supporting our chosen charity.  Classics for All has already committed to supporting a new project in 2012 and 2013 that will see the introduction of taster classes in Classics to state schools in Bristol and elsewhere in the UK. You can find out more about the charity's work and aims here:  www.classicsforall.org.uk

Find out more about our sponsor, Bristol's Institute of Greece, Rome and the Classical Tradition here:

The Legend of the Marathon Run

In 490 BC an eventful clash of civilizations took place at Marathon in Greece.  This momentous battle was once provocatively described by John Stuart Mill as an event in British history "more important than the Battle of Hastings".  An invading Persian army, then one of the world's paramount powers, was routed against all odds by an outnumbered force of Greeks.  Some ancient writers tell of a 42 km run from Marathon to Athens after the Greek victory at Marathon.  A runner was sent (so some say) to convey the news to Athens.  He ran the entire way, and upon arrival gasped the news: "We won!" but then promptly collapsed from exhaustion and died.  This famous story provides the template for the long distance marathon runs that are so popular today.

But did this legendary run really happen?  The problem with this story is that different ancient writers tell it differently.  Versions that tell of a run from Marathon to Athens after the Battle are found in works by Plutarch and Lucian, who were writing around 500-600 years later.  Disconcertingly, Herodotus, our most important source for the Battle of Marathon, does not mention a run from Marathon to Athens.  Instead, he tells of much greater endurance feat.  His story makes a 42km run sound like a mere jog around the block.

Herodotus, who was writing around 60 years after the events of the Battle, says that in advance of the battle, a runner (Philippides or Pheidippides) was sent by the Athenian generals to run from Athens to Sparta, a distance of around 250km.  His instructions were to request the Spartans' help against the impending Persian threat.  Philippides ran in vain.  The Spartans explained that they could not come right away because they were celebrating a religious festival. They did send their army subsequently - and they marched quickly, covering the 250km in three days - but they arrived at the battlefield too late.  The battle had already been fought and won. An event called the 'Spartathlon', run annually since 1983, commemorates the story of this extraordinarily long run from Athens to Sparta.

Classics for All XX

Classics for All is an education charity committed to funding projects that embed the teaching of Classics within the state education system. We do not receive any public funding but rely on the generosity of our donors to give students opportunities across the country. Thank you for your support.