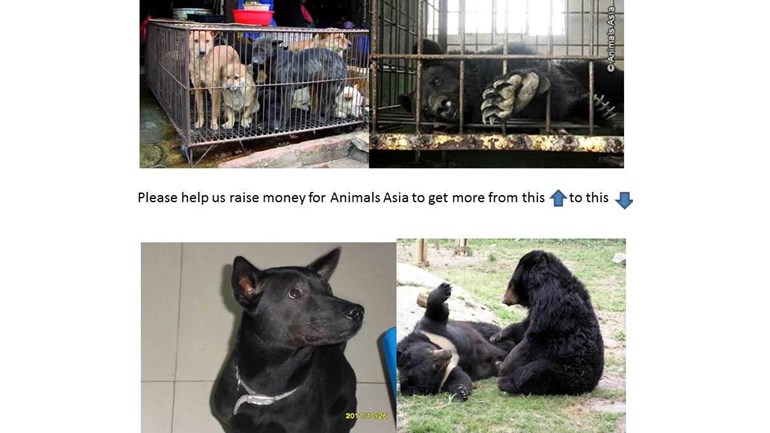 I trekked in China to raise money for Animals Asia in 2011. It was tough and at times very scary, especially when there was no path and a very steep drop on one side and steep rise on the other but nothing in the world can be anywhere near as scary, painful and horrifying as being trapped in a crush cage and tortured for bile for up to 30 years or maybe more.  The thought of why I was doing this kept me going and the thought of finally meeting Oliver, who spent the first 30 years of his life trapped just like that.

This time we'll have the humidity to deal with as well.  I don't do humidity but again, the thought of the money I'm raising to help Animals Asia look after the rescued bears and give them the life they deserve will keep me going.  Also the knowledge that some of the money will help dogs and cats rescued from the horrendous meat markets.

I will be 50 this year and would love nothing more for my birthday than some sponsorship to help me reach my target. I don't need any presents or parties, just knowing the animals will be helped will be the best present I could wish for.  I'm paying my own costs so all the money raised here will go to the animals.

I know these are tough times financially but I hope you can find it in your heart to sponsor me, even a little bit, to help Animals Asia help those who need it more than anyone I can think of.

I'm sure Peter Egan won't mind me borrowing this - he explains in less than 2 minutes why we all do what we do. Please take a moment to watch and listen

On 22 March the New Year Rescue bears mentioned by Peter were released into their new dens and have now truly arrived home and can start their lives of freedom, given to them by Animals Asia.

A little more about Animals Asia:

Animals Asia is devoted to ending the barbaric practice of bear bile farming and improving the welfare of animals in China and Vietnam. They promote compassion and respect for all animals and work to bring about long-term change.

The Animals Asia team has been rescuing bears since 1994 and is the only organisation with a bear sanctuary in China. Animals Asia's founder and CEO, Jill Robinson MBE, Dr.med.vet. h.c., is widely recognised as the world's leading expert in the cruel bear bile industry, having campaigned against it since 1993.

Animals Asia works to end the barbaric bear bile trade, which sees over 10,000 bears - mainly moon bears but also sun bears and brown bears - kept on bile farms in China, and around 2,400 in Vietnam

Animals Asia works to end the trade in dogs and cats for food in China, and lobbies to improve the welfare of companion animals and promote humane population management.

Animals Asia campaigns for an end to abusive animal practices in zoos and safari parks in China, and works closely with governing authorities to improve animal management and increase awareness of the welfare needs of captive animals.

So please dig deep and donate now.  Thank you!!!

Animals Asia is devoted to ending the barbaric practice of bear bile farming and improving the welfare of animals in China and Vietnam. We promote compassion and respect for all animals and work to bring about long-term change.