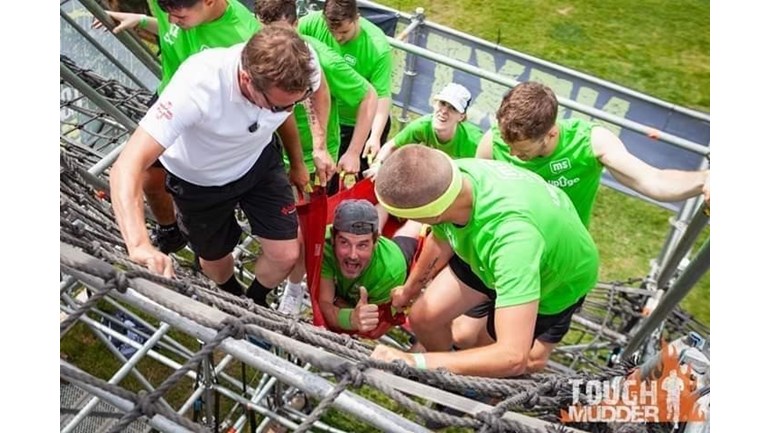 Tough Mudder - Because We Can

Getting Mark plus wheelchair through Tough Mudder! for Shift.ms because It's a wonderful charity for the newly diagnosed

We support MSers to acknowledge their MS & get on with life

Well we're a bunch of friends and colleagues of Mark at upUgo.com. We're not just going to attempt to complete Tough Mudder ourselves: we're also getting Mark Webb, who has advanced Multiple Sclerosis and is in a wheelchair, round the course too.

Mark was diagnosed with MS in 2007, though looking back his first hints of symptoms had been creeping up on him since 1992. MS is an autoimmune disease attacking the central nervous system in the brain and down the spine. There are dozens of symptoms for people with MS to 'collect', and Mark has an awful lot of them. The disease is a progressive one and there is no cure. Some 107,000 people in the UK alone have MS and most of them will have been diagnosed between the ages of 20 and 40.

Mark has very limited use of his lower limbs, and he's been working out as hard as he can to retain some upper body strength. But we're gonna be doing most of the heaving and hauling...

We're raising money for Shift.ms, the global social network for all MSers, but particularly for the newly diagnosed. Getting hold of MSers as soon as possible after diagnosis is crucial. They need a great support network, access to medication, exercise and healthy eating to help their long-term prognosis.

We're gonna have fun, we're gonna be knackered, and we hope we can do something extraordinary!

Shift.ms is the social network for people with multiple sclerosis. Founded by MSers, for MSers, the charity supports many thousands of recently diagnosed people across the world, as they make sense of MS. It’s independent and it’s free.

Charity Registration No. 1117194
Find out more about charity fundraising