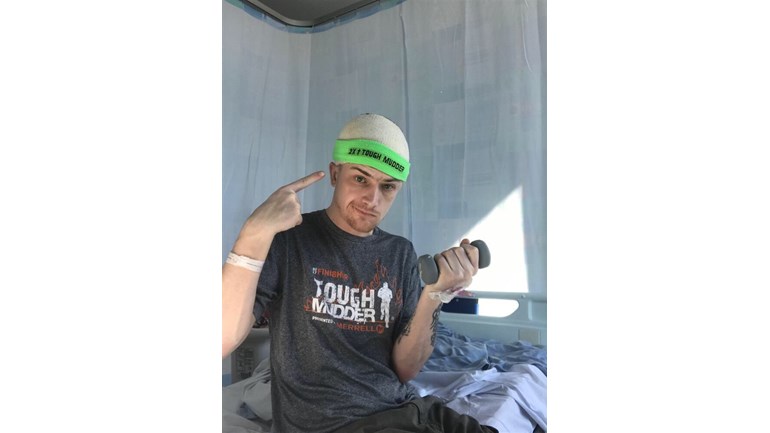 Completing Tough Mudder for P.A.U.L For Brain Recovery because I want to prove even a tumour can’t stop me!

P.A.U.L For Brain Recovery exists to make life easier after brain injury by providing guidance and support to empower all affected by ABI. We would like to say thank you for fundraising for us. You will be helping us to provide a positive future for someone affected by brain injury.

Hey there! First of all, thanks for taking the time to come and check out my fundraising page! secondly, apologies for the rather long story your about to embark on but I feel the best way for me to promote what I'm doing is to lay it all out for you to see.. :)

Back in January 2018 I was diagnosed with a brain tumour. Around 45/50% of the tumour was removed back in March, leaving a 2cm tumour behind. I’m now recovering. The first few weeks after surgery were incredibly hard as I had lost all strength on the left side of my body. Over the next few months I began to notice that my mental heath had taken a battering. Although I had recovered almost completely, the side effects of brain surgery were starting to take effect. Thanks to the effects, I lost a lot of friends.. Luckily for me I had things to keep me focused.. In January this year, just a few days before I was due to fly out to volunteer in Africa, I found out that I had a serious infection that I'd picked up after the brain surgery - resulting in me having to be sent back to surgery to have a large chunk of skull removed.

Back in 2008, after a long run with depression, anxiety and two failed suicide attempts, I had decided to attempt to take my own life.. Though shier luck I failed but this is still an event that haunts me even now.. Its for this reason, back in 2014 I decided to create a "bucket list" as a means to keep me busy and my mind occupied.. The first item on the list happened to be my first trip in a plane... For a skydive! That ended up being for charity. Soon after I found that I loved taking on challenge's to raise money and awareness for different charity's that had either helped me or had made some form of impact on me..

﻿For the last 4 years I have been fortunate enough to work with a great organisation in Hull, working in a homeless support hostel, helping to rehabilitate some of Hull's homeless and less fortunate.

so far I have raised money for various charity's by completing the Hull 10k twice, hosting several coffee mornings, pie in the face raffles and being gunged (more than once!)

Thanks for taking the time to read this! :-)

P.A.U.L For Brain Recovery exists to make life easier after brain injury by providing guidance and support to empower all affected by ABI. We would like to say thank you for fundraising for us. You will be helping us to provide a positive future for someone affected by brain injury.

Charity Registration No. 1164620
Find out more about charity fundraising