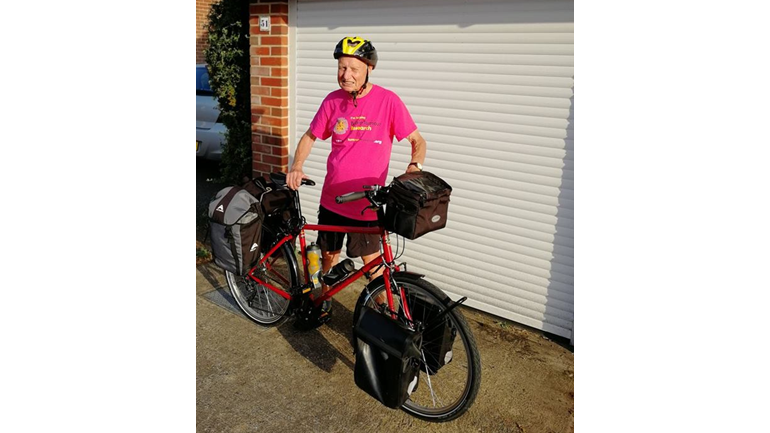 I am cycling across Wales and Ireland by bike for Brain Tumour Research because I love cycling for a good cause!

Thanks for taking the time to visit my JustGiving page. I have been keen to do a cycle tour as training for my duathlons and also as I enjoy exploring new places I have never been to before.

What provided the final impetus was my daughter Juliet’s announcement that she was starting another project to raise funds for Brain Tumour Research (https://www.braintumourresearch.org/) in memory of her husband Nigel. Six years ago, Nigel had started having headaches and imbalances and when his doctor decided to refer him for tests, a brain tumour was found. The surgeons removed as much of the tumour as they could and referred him for chemotherapy and radiation but, before the treatment could start, Nigel died suddenly leaving Juliet with their two sons, Mikey and Jamie.

Despite being in close touch, I still can’t imaging what it was like for them day by day, but their great strength has been in supporting each other, so much so that Mikey started work in July 2018 as a Software Developer just after obtaining a first-class degree at Plymouth University, and Jamie will be starting at Portsmouth University next year after obtaining Triple Distinction* in his BTEC studies. Not bad for two young men who lost their dad when they were aged only 17 and 12! Portsmouth University has a Brain Tumour Research Centre of Excellence, as has Plymouth University, and the family has already raised the £2,740 required to put up a plaque in memory of Nigel on each University’s Wall of Hope. The money goes towards research at the Centres of Excellence.

Juliet, urged on by family and friends, has decided to raise money for a third plaque and my son Ian has now posted on Facebook that on 8th September 2018, he and Juliet will be undertaking the Thames Path Challenge, a continuous walk of 50k from Runnymede to Henley-on-Thames to start the new fundraising effort. I decided that the least I could do was contribute to the fundraising, but I prefer to do this sitting down – on a bike! So, a side challenge to my bike tour is to raise money for Brain Tumour Research. Here is a link to my touring blog: https://westandfurthestwest.com/