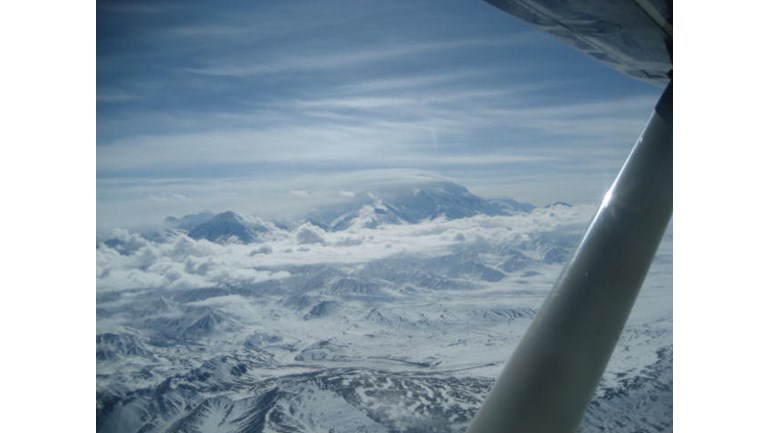 climbing Mt. McKinley for Cancer Research UK because their work brings us closer to finding a cure.

Thanks for taking the time to visit my JustGiving page!

This year I am tackling Alaska's Mount McKinley - also known as Denali, "the high one" - to raise funds for cancer research in my father's memory. This is my fourth major mountain fundraising project and will be by far the hardest.

McKinley is pretty brutal. The highest mountain in North America, McKinley is one of the Seven Summits at 6,100 metres (20,320 feet) and the third most prominent peak on the planet after Everest and Aconcagua.

Because it is only a few hundred miles below the Arctic circle, McKinley sees some of the coldest weather in the world, especially during fierce Alaskan storms which can bring winds of over 100 mph and becomes an icy hell with temperatures of minus 40 celsius. For this reason, climbing Mt McKinley combines the challenges of a high-altitude climb with those of a polar expedition. Add to that the necessity of carrying backpacks of 60 lbs plus dragging a sled of 100 lbs (no porters!) for 2.5 weeks and you can see what I'm talking about. We'll also have to make our own ice fortresses to shield the tents against the severe conditions.

Training has begun in earnest and is an education all in itself. The process includes such delightful discoveries as protein shakes and being the only maniac to carry a backpack containing 50 lbs of water on the step machine in the gym! The aim is to gain a significant amount of muscle and fat before leaving - climbers typically lose upward of 4,000 calories a day on such an expedition.

I fly to Alaska on June 22 and the expedition sets off on June 25. All being well, summit day should be between July 9-12. For comms, I plan to wear a GPS tracker which can be followed online and may rent a satellite phone.

A big thank you for all your support over the last few years. I started climbing in 2009, the year after my father succumbed to cancer, and have not looked back. I hope to climb one mountain a year in his memory, for as long as I can. Any support is very much appreciated - whether in the form of donations or hot drinks!

Thanks to your support, these mountain climbs have raised over GBP6,000 for cancer charities working on research for a cure and helping people affected by the disease.

Thank you again for all your support!