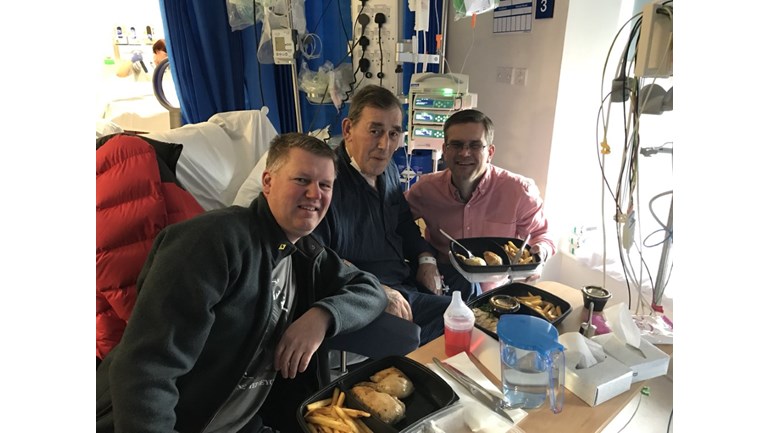 Where do I start with a man who meant so much to, and impacted so many lives of those who knew him?

The last few weeks were probably some of the most difficult, but most amazing out of his life. He had a battle on his hands and still managed to bring joy and happiness to those around him.

Grandad called Dad on the 17th December telling him he had a ‘problem’ with his ‘tubes’ as they were known. Grandad didn’t do things by halves. In 2001 he endured some incredible surgery to repair an aneurysm. Mr. Mavor and his team at the LGI did an amazing job of saving his life given that no operation like this had been done before.

Grandad never caused a fuss so when he called Dad we knew it was a serious problem, and he was worried. Dad told Grandad to ring the NHS Helpline and they sent the paramedics. They took him to the Pinderfields Hospital. Remarkably they sent him home with a pack of paracetamol for the pain and said they didn’t know what they’re looking at.

I got a text on the 28th December saying that Grandad had been admitted to the LGI hospital after a last-minute appointment at the vascular clinic. I rushed to the hospital to see him, with sandwiches, chocolate, and drinks (not knowing he was preparing for an emergency operation)

Mr. Mavor who did the original surgery all those years ago was fascinated and couldn’t help but take on the old kit car as they referred to him as. This was the first of many funny stories. He got told when preparing for surgery that worst case scenario was that he may lose his legs – not first time he’d be legless.

To cut a long story short, Grandad had 2 major operations in the space of 2 weeks and to cut an even longer story short, the operations went well initially and were making a great recovery, but as the day he had anxiously been waiting for – the day he was finally on his way home. Suddenly, things started to unfold and Miracle Mick (as his New Zealand friends liked to call him) was admitted to Intensive Care to engage the greatest battle which was too great for him to win.

When in Intensive Care, patients only spend a minimal amount
of time to recover, and they are then moved into other wards, meaning that the care teams don’t get to know their patients – but not Grandad

He decided that it was his new home and that he was living there permanently. He was the first ICU patient to have their own PJs, Slippers and Dressing Gown with him.

He got to know many of the staff on an affectionate level and
vice versa. So much so they shed a tear when the porter came to take him to another ward – the start of his journey home.

We were gutted that Grandad needed to go to ICU after all he had been through. He did a great job to come through major surgery. He was recovering incredibly but for one reason or another, this bridge was too far to cross. I also believe deep down we prepared for the worst. He still managed to make light of the situation through his own way.

The medications he was on, pneumonia that he has developed, and the lack of oxygen in his blood due to the poor lung function somewhat sent him delirious. He still managed to greet me with a sink, and “Eyup Kiddo” This made my day, and I know it was my Grandad sitting there.

He was convinced that the hospital was a knocking shop, which Uncle Tony was a surgeon and Dad was a cleaner to clean the bedrooms. He even asked us who paid for the room, and where the car was parked – priceless!!

My grandad was a real man's man. He didn’t suffer fools lightly, and in his younger days, he was certainly known to be able to handle himself. When he expressed his wishes to have his toes and fingernails painted it was a type of the kind of guy he was. Nina completely snapped a pair of toenail clippers whilst trying to cut his toenails. Eventually after another set of clippers, a pair of scissors, and 3 nails files he had a pedicure that anyone would have been proud of. The following night, this magnificent pedicure, he managed to convince the nurse looking after him, that the only way he would put on the oxygen mask was if she painted his toe and fingernails bright red and give his toes a sparkly pink finish.

Grandad spent 2 whole weeks in intensive care, and between all the family we spent plenty of time with him. Grandad was very stubborn, and if he was to do anything it would be his way, and no other.

The family got told on about 4 occasions, that he wouldn’t make it through the night, but he kept fighting, even though he weren’t sure how, and we were amazed at how strong he was given the circumstances. Every day, he has the power to continuously make us laugh and cry.

Grandad was the master of moaning and expressing his opinion (with a hint of sarcasm) He moaned about the food but is the only guy I know ICU that’s had a chicken dinner delivered and eating it whilst admiring the view in a comfy chair!!!!

He was cheeky to the very end, with all the nurses. He loved the attention they gave him and tried to make light of every situation.

What more can I say about my Grandad? I don’t need to say how much of a lovely, kind, caring, and amazing man he was. He taught me some of the most important lessons in life, guided me through some of the rough times, and provided me with the greatest advice.

I have created some of the most incredible stories, and I will treasure this forever.

You are my rock, my inspiration, and my role model. You will always be within my heart, and by my side forever.

In memory of my lovely Grandad, I will be walking 200 miles, raising money for British Heart Foundation.

Mick Stobart – My Grandad – A man of many principles, but few spoken words