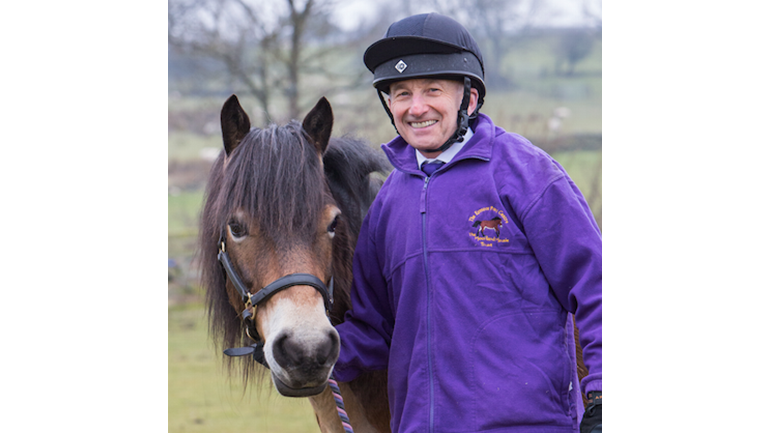 Pensioner Michael Woodcock will no longer be riding Exmoor pony Apollo in a jumping challenge at the end of July ­ one of a series of special events to mark the tenth anniversary of the Exmoor Pony Centre.

72 year old retired solicitor Michael had hoped to compete with eight year old novice Apollo at the Dunster Country Fair on July 27th to raise money for the Moorland Mousie Trust, the charity which runs the Exmoor Pony Centre. It was a big ask as the young pony was first backed in October 2015 and Michael first sat on a horse at the age of 69.

Michael says: “I didn’t take on this challenge lightly. I genuinely felt that Apollo and I had time to train together and pull this off, but it quickly became apparent that ­as an inexperienced young pony­ Apollo needs a very experienced rider.”

“A replacement Exmoor pony more appropriate to my age and limited experience could not be
quickly found, so I have regretfully had to withdraw from my fundraising challenge. Instead,
another rider will show off Apollo’s wonderful qualities and versatility at the Fair.”

“I will continue to do all I can to support the vital work of the charity that does so much to promote and protect this important endangered rare breed. I hope people will continue to support this fundraising challenge, but if anyone who has pledged money through my justgiving page would like their donation returned I will gift aid the equivalent sum to reimburse the charity.”

It has not yet been decided who will partner Apollo in the show ring, but Michael will continue as the pony’s sponsor.

To raise money for the vital work of THE MOORLAND MOUSIE TRUST, Apollo and I will live together at the QSR Equestrian Centre at the foot of the Quantock Hills from April 2016 to train for the Exmoor Pony Society’s jumping competition at the Dunster Country Fair on Wednesday 27th July 2016.

This charity runs THE EXMOOR PONY CENTRE where I sat on a horse for the first time in my life in July 2012 at the age of 69.  I was encouraged to learn to ride and am now learning to jump to raise much
needed funds for the charity at the Fair when I will be 73.

Visit www.exmoorponycentre.org.uk for information about the charity’s work protecting and promoting this endangered rare breed of native ponies and for links to my Facebook page and Apollo’s very own diary on twitter to follow our progress at QSR. Please spread this story around family and friends.

The Moorland Mousie Trust based at the Exmoor Pony Centre co-ordinates veterinary work, conservation grazing and interaction with the ponies. Youngstock from the moorland herds are taken in when they have no certain future. Assisting in the survival of the iconic free-living Exmoor pony herds.