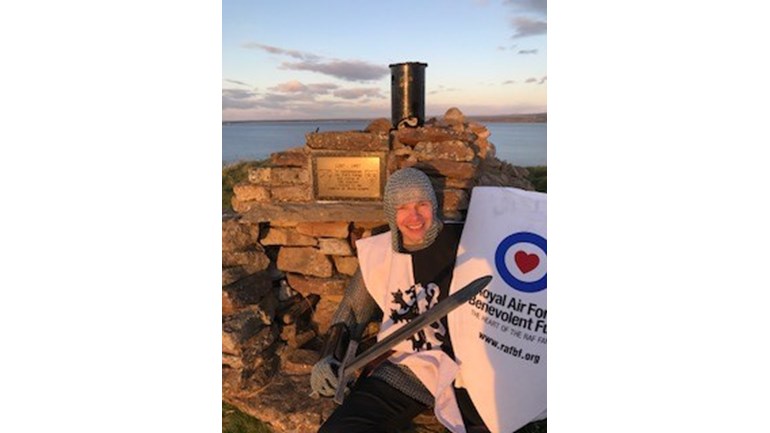 My name is Andy McMahon and I have been a Lance Corporal on 2622 Sqn, RAF reservists, for 10 years.   I also work for Highlife Highland, where I have been a Youth Development Officer since 2009.

I have already done ten marathons, but on Sunday 23rd April I will be taking on my most challenging yet as I attempt to break a world record by running the London Marathon in 20kgs of chainmail. The current record of 5hrs 43mins was set last year, but I am hoping it will be a Scottish knight crossing the line to finish in the record books this year! My race number is 24574, so please give me a cheer if you see me go past!

It's all very crazy and a bit of fun but on the day I  hope to be able to channel the bravery and spirit of the great Scottish knight, Andrew de Moray from Castle of Avoch (Ormond Castle) who, as William Wallace's joint 'Commander of the Army of the Kingdom of Scotland', took part in the victorious Battle of Stirling of Bridge.

My wife, Lorraine and two daughters, Meghan and Taylor will be waiting for me at the finish line in London and I am looking forward to meeting up with the other RAF Benevolent Fund runners for a well earned drink afterwards!

I would like to say a massive thank you to The Knight Shop in Conwy, North Wales for their incredible support with my chainmail suit.