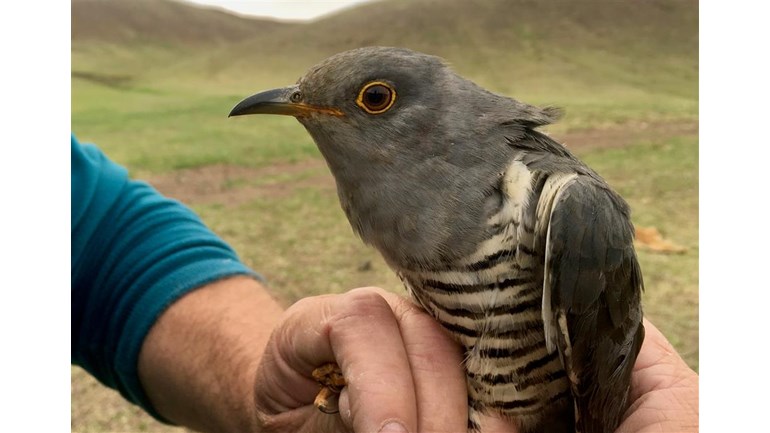 The British Trust for Ornithology is the UK's leading bird research organisation. Our monitoring and research projects are carried out by an effective partnership of birdwatchers and professional ornithologists, the results of which inform the conservation of birds in the UK.

Thank you for taking the time to visit the JustGiving page for the Mongolia Cuckoo Project.

Across much of their range, Cuckoos are in steep decline.  We urgently need to understand migratory routes, stopover sites and habitat preferences, as well as raise public awareness, in order to have a chance to save this iconic bird.  That is why BTO in partnership with the Wildlife Science and Conservation Centre of Mongolia and Birding Beijing, supported by the Oriental Bird Club, are tracking cuckoos from the east of the range, complementing data from similar studies in Europe.

We're entering a critical stage of the Mongolia Cuckoo Project with the four Common Cuckoos (Cuculus canorus) expected to make perilous ocean crossings to Africa very soon and the imminent discovery of the wintering grounds of NOMAD, the first ever Oriental Cuckoo (Cuculus optatus) to be tracked.

With your support, together we can make a difference.

BUT, we haven't yet raised enough funds to cover the satellite time needed to continue to receive the data from these birds... After all the hard work so far, it would be awful if we could no longer receive the signals from the five Mongolian Cuckoos.  That is why we need YOUR help to make sure we can continue to track these birds....  We urgently need to raise £6,000 this Autumn to pay for satellite time.  Any gift, large or small, can make a real difference our understanding of cuckoos across the globe so that we can help ensure their survival for future generations.

For our five birds, the cost is £300 per month.  That's £60 per month (£15 per week) for each cuckoo!  Please help us by making a donation and, if you wish, express in the comments field which cuckoo you'd like to support.  For details of all five birds, please visit: https://birdingbeijing.com/the-mongolia-cuckoo-project/

Donating through JustGiving is simple, fast and totally secure. Your details are safe with JustGiving - they'll never sell them on or send unwanted emails. Once you donate, they'll send your money directly to BTO. So it's the most efficient way to donate - saving time and cutting costs for the charity.

Thank you so much from Chris, Terry, Dick, Lyndon, Nyambayar, Batmunkh and Tuvshi (the Mongolia Cuckoo Team).

Cover photo: "Nomad" the Oriental Cuckoo after being fitted with his tag, Khurkh, Mongolia, 6 June 2019.

The British Trust for Ornithology is the UK's leading bird research organisation. Our monitoring and research projects are carried out by an effective partnership of birdwatchers and professional ornithologists, the results of which inform the conservation of birds in the UK.

Charity Registration No. 216652
Find out more about charity fundraising