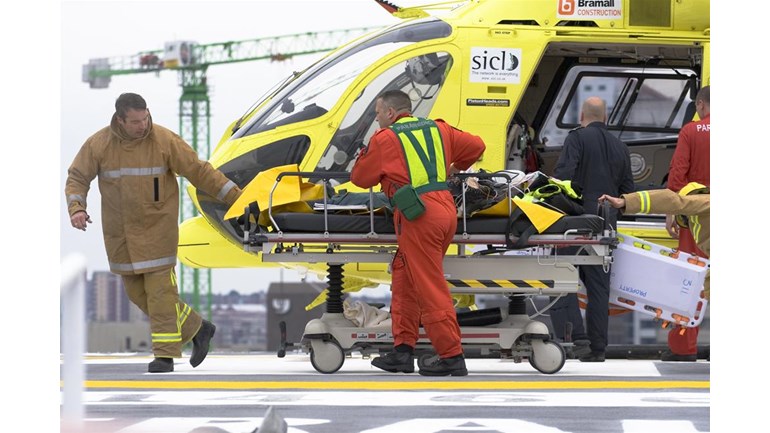 Despite the lousy weather yesterday everyone made it back to Brighouse yesterday after a very eventful and hopefully for the Yorkshire Air Ambulance (YAA) worthwhile weekend of monkey related fundraising!

I apologise for the length of this page but so many people and organisations were involved and have been so generous both financially and with their time that I wanted to try and thank everyone involved and give you my take on the weekend.

It was definitely a game of two halves with the halftime entertainment in Scarborough dividing a day of great weather/fast riding from a day of lousy weather/slow (but safe) riding punctuated by a variety of planned and unplanned stops.  It went something like this:

We formed up slightly later than hoped at Bankstone in Brighouse after photographers from the Brighouse Echo and Huddersfield Examiner got us posing and then doing a ride by as Kerry Garner from the Yorkshire Air Ambulance waved us off The bikes that set off (in alphabetical order) were: Bankstone Gorilla (Me) Bikesure Black (Matt Sopp and Grant Varnham) Bikesure Chrome (Lee Boughen and Tom Lake) BLD Super Gorilla (Clay Moule) BLD tartan seated shopper (Mike McMillan – thought they said chopper) Bott and Co (Denis Wakefield and Malcolm Crompton but mainly Denis) Colin Waterman on the big monkey Jon Fawcett on the black seated monkey – wise seat swap before the event Motorbelle Chrome (Nick Chalkley) Premier Medical Group (Matt Dakin and Louis Blenkiron) Other vehicles in the convoy were: Copart lead Shagwar containing expert lead car driver Martyn Buchan and exemplary navigator and artistic director Stephen Tacey PMG van with Graeme Hills, Louis Blenkiron and YAA related dressing up gear Bikesure van with whichever of the Bikesure boys were not on the bikes Bott and Co Range Rover with Paul Hinchliffe, Susan Luya, Will and Archie Hinchliffe – all excellent bucket shakers, Archie was the curly haired 9 year old who reckons he jangled for the most cash and told people he only took notes! Bott and Co Passat with the lovely Bott and Co ladies consisting of Laura Curbishley – driver, Marie Goulbourne, Georgia Cross, Laura Higginbotham and Katie Race – also excellent bucket shakers and mobile phone suit wearers BLD support van with Chris Bennison and family containing spare fuel and 2 spare bikes
The first planned stop was at Websters Insurance in Brighouse town centre where Jez and his staff made us very welcome and helped us get some great photos, blocking the pavement with all the bikes lined up across the front of his office, whilst the bucket shaking crew worked the crowd of bemused onlookers extracting as much cash as possible for the cause
After a brief stop to top up the tanks in Keighley we arrived at Colin Appleyard motorcycles where their customers were encouraged to donate as we formed up for the photos and then formed an orderly queue for the single toilet.  Thank you to Kevin and his staff for their forbearance as Bernie lurched menacingly around the showroom whilst Clay and Mike from BLD tried to stem the oil leak from the BLD Gorilla with some instant gasket.  19 miles covered at this point.
Back into the saddle again the plan was to ride non-stop to Ilkley however someone had kindly left diesel on a sharp right hand bend in Riddlesden which accounted for Matt Dakin from PMG and me.  Unfortunately Matt hurt his wrist and discovered soon after that he was not able to ride however Louis Blenkiron was able to take over whilst Matt drove the PMG van.  This was a very important role as the van contained both Bernie the Bear and the Bazza Bank suits which were to make photo call appearances at most of the stops – Graeme Hills is now an expert at dressing as a bear – so much so several of us suspect he had been getting some clandestine practice in since last year.
After a brief flapjack stop at the picturesque Cow and Calf we descended into Ilkley and lined the bikes up across the shop front of Moto Strada who had very kindly laid on some refreshments and handed over a considerable donation for the privilege of hosting the stop, I am sure the publicity will be worth the effort.  31 miles covered.
It was then off to Harrogate however the BLD Gorilla finally gave up at Askwith and Clay swapped to the spare monkey leaving the Gorilla in the support van.  After crossing and recrossing the reservoirs, and negotiating the fearsome Harrogate one way system our redoubtable lead car, driven enthusiastically by Martyn Buchan led us to NCi on Victoria Avenue where we once again proceeded to block the pavement and were met by Neil, Craig, Richard and some of their staff.  We were taken up to the fourth floor and presented with a fantastic lunch and the loan of some tools for some running repairs.  After a photo call both inside their very impressive offices (which involved taking one of the monkeys in the lift) and outside, we once again formed up and headed for Northallerton.  We had travelled 49 miles at this point.  The Bott and Co Range Rover left us at this stop as Paul had to return home with his family, we missed your bucket shaking once you had gone!
Our navigator Stephen Tacey surpassed himself in the choice of roads as we headed North via a brief fuel stop before arriving at Simon Bailes accident repair centre (thanks to Dave Rathmell for organising this) where we were joined by Andy Jones to ride the spare monkey, allowing Clay to ride the BLD Bandit.  99 miles into the trip.

Mike and Andy worked wonders with the burgers, beer and sausages and everyone except Jon was relieved to be able to get into some dry clothes for the drive home, he was riding back – talk about glutton for punishment!  We covered 301 miles in total along some great roads, through some great scenery (when we could see it through the rain) and for a great cause which we did not need to use thanks to skilled and safety conscious riding by all those concerned.

Thank you again to every one of you that has been involved in whatever capacity.  I hope everyone had a good time and if so please tell all your friends as I would love to organise a similar event next year.  We have learnt a few more lessons and I have received a few suggestions, the printable ones are as follows:

Paid for stops are great for fund raising – do again next year The best stops are those with a welcoming committee To plan a lunch stop each day that includes a fuel and fettling stop for the bikes to be checked over, loose bits tightened, chains adjusted and lubricated by competent mechanics. We need a dedicated photographer/video camera person and could use a handlebar mounted camera on one of the bikes The lead and tail vehicles need some sort of signage so people know what we are doing We all need to eat together on the Saturday night

If you would like to take part next time please contact Dickon Tysoe at dtysoe@bankstone.co.uk  If you do not already have a monkey bike we can help obtain these from Easy Rider who have once again heavily subsidised the price to help the charity.


You can see the Yorkshire Air Ambulance in action on the television as series 4 of Helicopter Heroes has just started airing on weekday mornings at 9.15 on BBC1.  It is also being broadcast in HD for the first time, it is what Sky Plus and the iPlayer were made for!

Donating through Justgiving is quick, easy and totally secure. It’s also the most efficient way to sponsor our event: The Yorkshire Air Ambulance Charity gets your money faster - and, if you’re a UK taxpayer, Justgiving makes sure 25% in Gift Aid, plus an extra 3% supplement, are added to your donation.

So please sponsor us now.  Not a penny of your money goes towards the painkillers and osteopathy bills after the event - we pay for these ourselves!

Thank you for choosing to support the Yorkshire Air Ambulance! We need to raise £12,000 every day to keep our life saving service in the air. We would love to thank you personally for your efforts, please email info@yaa.org.uk when you have completed your challenge. Good luck!