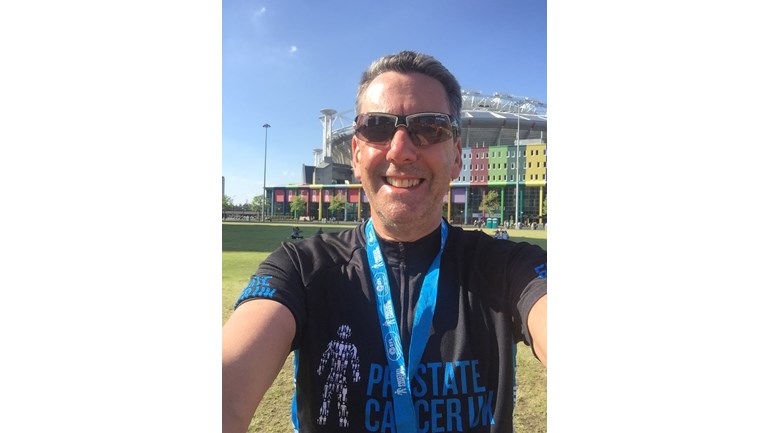 I am once again taking up the F2A Challenge. for PROSTATE CANCER UK because to raise awareness & funds to fight this disease.

I first heard about the Football to Amsterdam cycling challenge one cold November night in 2016 sat in a hotel in Rotterdam and thought what a fantastic idea, being a football fan (Everton FC) it really caught my imagination, so I got my phone out and signed up.

I hadn't been on my bike for quite some years but thought it can't be so difficult to get in shape, how wrong you can be. So, my New Years resolution for 2017 was to start to get in shape and put some miles on my bike to make sure I didn't fail in my quest to cycle 147 miles over 2 days to raise awareness, and at least £1000 for this fantastic cause.

By May I had completed a number of cycle challenges, the last being a 50 miler, so I felt ready.

June, and the F2A 2017 Challenge arrived, as a solo rider I arrived at Barnsley FC very apprehensive about what lay ahead and how I would manage, I needn't have worried.

2 days later I was having a drink, or ten, in Amsterdam with at least 200 other like minded individuals, new friends, sharing what we had just completed, our pain, our laughs, it was something I will remember forever.

To top it all we eventually as a group raised over £700k in the fight against prostate cancer.

Once again I am asking for your help in achieving my 2018 target of £1000 to help fight and raise awareness of this disease, I know so many of you helped me and donated towards this years ride, for which I thank you massively, but lets do it again and try and smash the target and last years total.