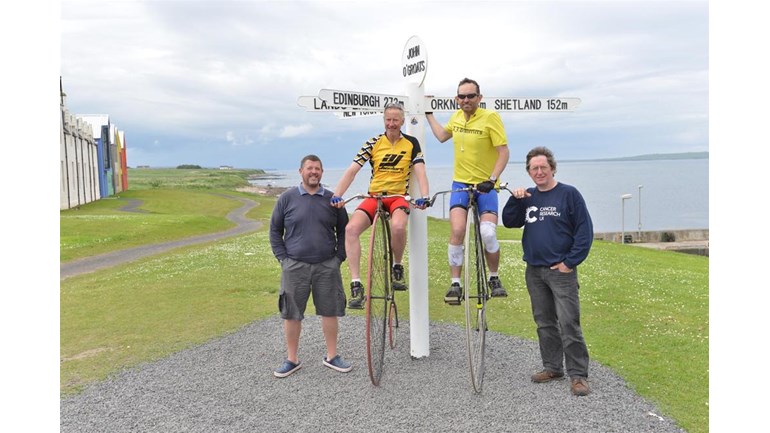 Andrew Donald, and Chris Saltrick christened their journey The Old Cranks Ride Across Britain and completed the 940 mile journey in five minutes short of 12 days.  With money still coming in, they have already raised more than £13,000 for Cancer Research UK.

The bikes that Chris & Andrew were riding were a ‘New Rapid’ manufactured by the St. Georges Engineering Company in around 1888 and an ‘Invincible’ made by the Surrey Machinists Company in about 1885.  The bikes have solid tyres, no gears and no proper brakes. With a saddle height of just under six feet, any loss of concentration can result in a serious fall and almost certainly broken bones.

The Penny Farthing was only built for a relatively short period of time, because of the serious accidents that occurred and it was superseded by the Safety Bicycle in 1890. The height of the bike means you are on the same level as lorry drivers in their cabs, which they found a bit of a surprise, but they were all fantastic in helping us on our way.

Andrew said: “I can’t believe we actually managed to finish the ride. Lots of people along the way were saying we must be mad and we had to agree with them. Some mornings when we woke up we were just so sore and tired we didn’t think we could face getting back on the bikes. We were averaging around nine miles an hour and were out for about twelve hours a day with about eight to nine of those actually on the bikes.

The support from people along the route was fantastic and cheery waves and smiles helped us to carry on. Motorists were fantastic and gave us a wide berth and there were lots of horns being sounded to spur us on our way”.

The men, who arrived at John O’Groats on June 3, managed the journey with no major mishaps other than a lot of broken spokes and a lot of re-greasing.

Chris said “On our way we were also delighted to be able call in at a Penny Farthing museum in Knutsford where we had a warm welcome from the owner Glynn Stockdale and met other fellow enthusiasts. Glynn and his friend Nick Clayton had completed the same trip in 1984 (possibly the last time such a trip was attempted on original antique bikes) and it was their encouragement that gave us the inspiration to attempt this trip”

Andrew said: “When we got to John O’Groats there were other ‘end to enders’ finishing but I think we somewhat stole the show.

The two friends decided to attempt the unusual challenge as their families have both been affected by cancer.  Andrew lost his mother from bowel cancer and Chris’ mother has battled with Non Hodgkins Lymphoma.

Some of the money raised for Cancer Research UK will help with the construction of the Francis Crick Institute in London which will be at the forefront of preventing, diagnosing and treating cancer and some money will go to the development of personalised cancer treatment medicines.