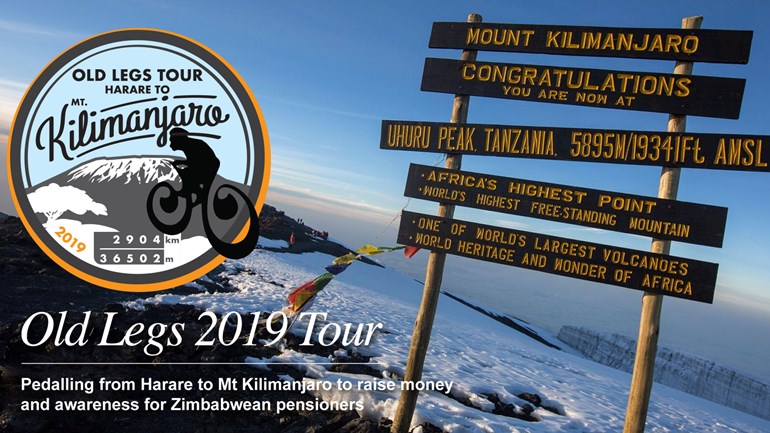 My name is Eric de Jong. I’m 59 and
I have a blue mountain bike. And in April 2018, Bruce Fivaz aged 72, Neal Leach
aged 70, Dave Whitehead aged 42 and I rode the inaugural Old Legs Tour from
Harare to Cape Town to raise money for Zimbabwe’s pensioners. The generation
that built our country have had their pensions, their life savings and their
wealth eroded and reduced to nothing by thirty years of mismanagement and stupid
ruinous economic policies that collapsed banks and wiped out pension funds,
leaving a generation that had worked and saved hard their whole lives with
nothing.

We rode 3100 kilometres on roads
less travelled, through the Kalahari and a town called Hotazel, through the
Northern Cape and bits of the Karoo. With a lot of help from a lot of generous
people we were able to raise $71,000 for Zimbabwe’s beleaguered pensioners.

But when we got home, fingers were
pointed at us for choosing a downhill destination. And so we’ve decided to do
it again, but this time we’re riding north, to a pointy mountain called Mount
Kilimanjaro. And it is going to be up hill all the way.

For the Old Legs 2019 Tour, Dave and I will be joined by Adam Selby, aged 60, Al Watermeyer aged 70, Jaap
van Staaveren aged 57 and from the Netherlands, Nik Bellwald aged 64 from
Switzerland, and Carol Joy Church aged 39 from Zimbabwe now living in Germany, Mark Johnson aged a lot from Australia, Alan Rheeder, 42 from Johannesburg and Hans Steenberghe aged 59 from the Netherlands.
Supported by Ryan Moss and long suffering wives Jenny de Jong and Linda Selby, Gayle Arnold from the UK, Bill Annandale from Harare and John MacDonald from Cape Town.
we will ride out of Harare on June the 1st and head north towards Mount
Darwin and Mukumbura, across into Mozambique and then up towards Caborra Bassa
and on to Tete and then into southern Malawi. We’ll hug the shores of Lake
Malawi passing through places like Nkhata Bay and Livingstonia on our way up
into Southern Tanzania. The traffic in Tanzania is supposed be hair raising,
even for bald people like me, so again we’ll seek out the roads less travelled.
In Southern Tanzania, these will take us through Tukuyu, up over the Elton
Plateau and through the Kitulo National Park, gaining an impressive 7444 meters
in just 263 kilometres, all on dirt. Should we survive, we will head north to
Iringa, Dodoma and Arusha, eventually ending up at the bottom of the pointy
mountain a.k.a. Mt Kilimanjaro, Africa’s highest point and the world’s highest
free standing peak. Whence upon we’ll walk up it in the company of friends and
family who will have joined us in Arusha. In all, we’ll have ridden an epic 2900
kilometres with a total elevation gain of 36000 meters.

Once again we will be riding to
raise money and awareness for the Zimbabwean pensioners. Our target is
$100,000. Our nominated charities are ZANE, the leading charity supporting the
aged in Zimbabwe, saving lives by providing food, medicines and somewhere to
call home. You can check out their projects on www.zane.uk.com. Within Zimbabwe
we will also be raising funds for Bulawayo Help Network and Pensioners Aid
Harare who care for pensioners across the length and breadth of the country.

Thank you for your kind support.
Please follow our progress on our web page but please be warned. Paint dries
quicker than we ride. The Old Legs Tour team will raise a glass to all of you
as and when we finally summit Mt Kilimanjaro.

Supporting over 1,800 pensioners in Zimbabwe, including 580 ex-servicemen and their wives or widows. Training in education and farming in impoverished communities. Grassroots health projects. Enabled the first clubfoot correction programme in Zimbabwe, helping 3,000 children to date.

Charity Registration No. 1112949
Find out more about charity fundraising