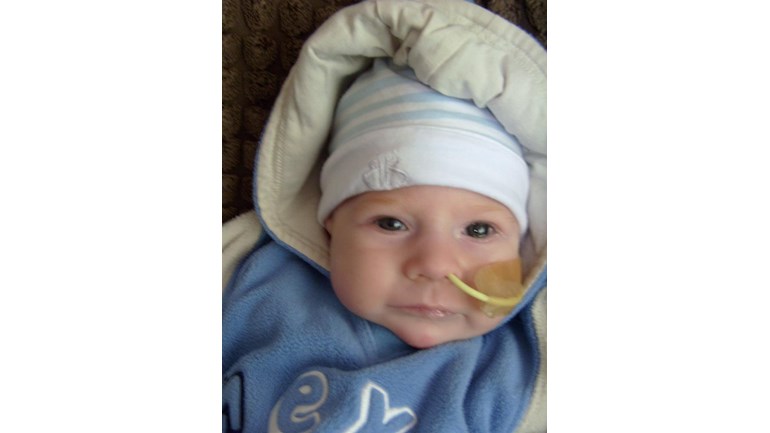 We tragically lost our beautiful baby boy when he was just 12 weeks old after a heroic fight with Ohtahara Syndrome.  Oliver was the bravest little boy and such a fighter.  Here is his story:

After a normal delivery we were so excited to finally meet our baby boy, Oliver is our first child and was so desperately wanted.   Within a few days of the birth the nurses picked up on some unusual twitches and he wasn’t feeding.  As a precaution he was moved to the Special Care Baby Unit where he had lots of tests to rule out common illnesses which all came back normal.   It was here that the doctors said these movements were seizures and he was given anti-seizure meds to control them.  He reacted badly and as a result starting having convulsions and breathing problems which meant he had to be put in ICU and on life support.  This was the start of a nightmare that no child should have to face.  As the seizures were unexplained, Oliver had to be transferred to the Intensive Care Unit at Alder Hey children’s hospital in the hope that the neuro- specialist could help him.  For 3 weeks we travelled the 120 mile round trip to sit and hold our babies hand and watch him being so brave whilst they took daily blood/did numerous other invasive procedures - still hoping and praying that he would be ok.

After an unusual EEG it was discovered he had an extremely rare form of Epilepsy called Ohtahara Syndrome which meant a short life expectancy.  After the initial shock we took strength from our amazing little boy and decided we would make his time the best ever.    His condition meant that the seizures were hard to control but Oliver responded well to the new meds and they even managed to get him off the breathing support and when he was 4 weeks old we finally got him home with a feeding tube.  A week later he was admitted back to hospital as he stopped breathing after being sick, he was put on breathing support and after numerous attempts to reduce the support Oliver wasn’t able to manage on his own.  We had to make the painful decision to say goodbye to our child and withdraw the support.  We were put in our own room and had to sit and watch his struggle to breathe.  After a rocky few hours Oliver did the unthinkable and pulled through and 24 hours later the doctors allowed us to take Oliver home to spend his remaining life surrounded by family.   The doctors didn’t know how long we would have, whether it would be hours or days but in the end we managed to have another six weeks with our beautiful boy.   In those six weeks his seizures got harder to control and he was having episodes where he stopped breathing due to the seizures.  Being the trouper he was he barely cried and was so brave. In the end it was just too much for his little body to take and he finally passed away peacefully in his sleep when he was just 12 weeks old.

They haven’t found any medical reason why Oliver developed this condition so we would ask you to please support us and help us to raise money for Epilepsy research so that they can research into these nasty and rare forms of Epilepsy and hopefully find a cure so that innocent babies like Oliver and their parents don’t need to go through what we have.