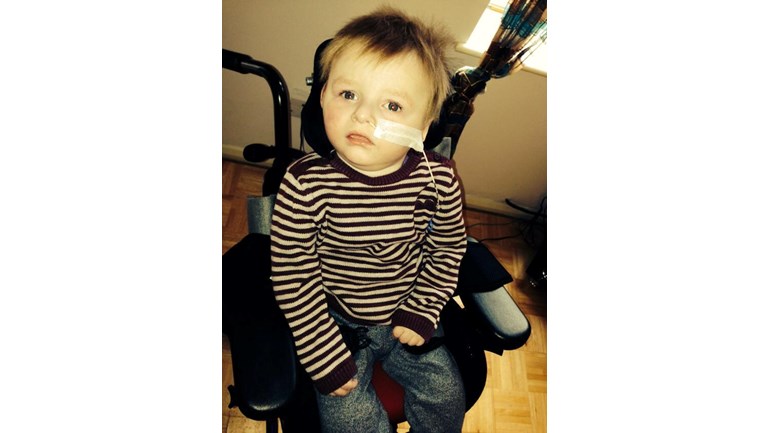 Hello, my name is Oscar. I was born on 12/12/11 to my lovely mummy and daddy - Jenn & Andrew. At 5 weeks old I was taken into hospital and had an operation on my tummy because the tube going from my tummy to my small intestine was thicker than it should be and was making me sicky. This is called Pyloric Stenosis. This was a very worrying time for my family but little did they know this was the start of a whole lot more to come....

At 6 months of age I was admitted to Ocean ward because mummy and daddy raised concerns that I was pale and floppy. From that point on it was quite clear that there was something not quite right as I wasn't meeting my developmental milestones. The doctors did several blood tests, several lumbar punctures (taking fluid from my spinal cord), scans of my brain, ultrasounds and had my investigations sent everywhere- even to doctors in Amsterdam!

I was discharged when I got better and it was during an outpatients appointment when I was 8 months old that my neurological consultant told my family that I was diagnosed with Menkes Disease. Everybody was shocked and couldn't believe this because once they read about the condition it was really nasty and even though I wasn't well, nobody could believe it was that bad.

Children with Menkes are said to not live a very long life. This was obviously devastating news for my family.

When I was around 10 months old I had an ambulance ride to the hospital because I was having funny 'movements' at home. in hospital, my parents were told that I was having infantile spasms.

At 11 months old I was taken into hospital  again because I was in a very deep sleep, had a very low body temperature and was unresponsive. It was at this point that my dietician ran tests  and found it was too dangerous for me to continue eating and drinking and this is when I had a tube put into my nose to feed me my milk.

following this is when I had a full team of professionals involved in my care - Physiotherapy, Occupational Therapist, Portage, Dietician, Community Nurse, Speech And Language Therapist and all of my doctors. This is when mummy became addicted to coffee because we had lots of visitors to the house.

the next few months were fairly uneventful - I stayed at home with mummy and daddy and they got to know me inside out.

When I was 1 year 3 months, mummy and daddy took me to Ty Hafan for the first time. They were reluctant to take me at first but soon they realised what an amazing place it is. The nurses and staff there are truly angels - they will do all they can for the children and their families.

every month from March 2013, me, mummy and daddy would come to Ty Hafan for the stay and play days with my friends, where we would play all morning with all the toys and then have a relaxing afternoon where we would either go swimming in the hydrotherapy pool or relax in the sensory room that has lots of lights and music and a water bed or we would have Touch Trust.

The day before my 2nd birthday in December 2013 I was taken into hospital because mummy and daddy noticed I was sleepy again. My oxygen levels were quite low and overnight I needed some oxygen to help me with my breathing. Early hours of the following morning (my birthday) I was rushed up to intensive care and put on a ventilator. My birthday party was cancelled and mummy and daddy and my close family spent the next 2 weeks 5 days at my bedside, all over Christmas. My family had lots of meetings with doctors and broke their hearts when the doctors said I was not strong enough and that the ventilator was keeping my alive.

On the 30th December mummy and daddy made the heartbraking decision for me to be transferred to Ty Hafan where I would be taken off the Bipap machine (I was put on Bipap when I was taken off the ventilator 3 days earlier) and given oxygen to make me as comfortable as possible during my last few hours. Little did those doctors know - I wasn't ready to give up the fight just yet. I defied them all, fought like a hero and 2 weeks later I was discharged home with a very happy mummy and daddy.

I knew there was a holiday to Bluestone coming up and I really didn't want to miss out on that!

The next 5 months were lovely and we had an amazing time in bluestone!

On February 22nd I had my VERY late birthday party with all of my family and friends. I even got to meet Spiderman!!

Also in the next few months we fitted in going to groups, going on lovely walks with mummy, visiting Ty Hafan for stay and play days and we also went for a lovely picnic with other families from Ty Hafan. we crammed in as much fun, cuddles and kisses as we could. I loved it!!

It was on Sunday 1st June that my battle with Menkes ended. It did not beat me - it was my decision. mummy and daddy always said I would let them know when it was time and this was it. I had one last cuddle with mummy and I fell asleep for the last time in her arms.

Tŷ Hafan offers comfort, care and support to life-limited children and their families helping them make the most of the time they have left together. For Tŷ Hafan to offer this unique service completely free of charge to families in Wales, it has to raise £4 million every year.