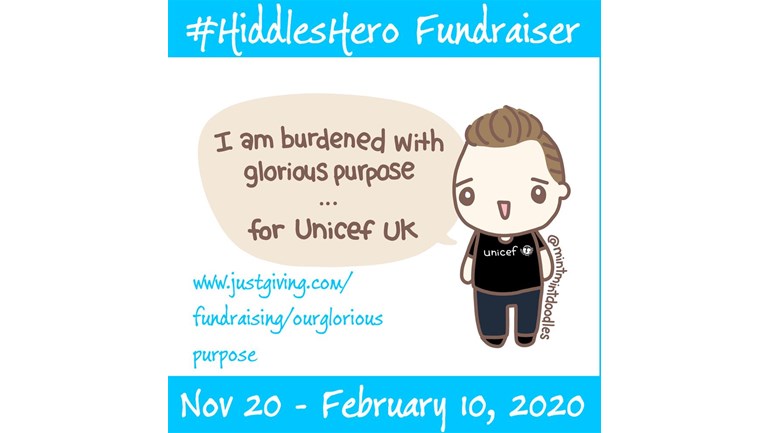 I Am Burdened With Glorious Purpose... for UNICEF UK

We work to keep children worldwide safe from danger

The greatest part of being a Tom Hiddleston fan is that we have the most generous fan group in the world! Tom's fans have raised nearly £100,000 for various causes close to both his heart and theirs. Tom has been a passionate supporter of many causes over the course of his career. Most notably, he began serving as a Unicef UK Ambassador in 2013, with his first mission to Guinea. Tom's current focus with Unicef UK has been his work in South Sudan.

To mark World Children’s Day we are launching our Unicef UK fan fundraiser for Tom Hiddleston’s Birthday. This year's raffle theme is #HiddlesHero. Tom has been a passionate supporter of Unicef UK and children’s rights for many years. The fundraiser will close on February 10, 2020 and all of the raffle winners will be selected on that date.

This will be the last fan fundraiser that I personally organize.

1. A Tom Hiddleston autographed Betrayal (London) programme. Tom arraigned for this to be signed and sent specifically for the fundraiser. I will include COA from Tom's assistant if you need verification.

2. A Tom Hiddleston and Charlie Cox signed Betrayal (Broadway) playbill. This is from the very first night of previews. I can include pictures of them signing if you need verification. I can also substitute a playbill with signatures from Tom, Charlie, and Zawe Ashton if you would prefer the full cast (but it's not from the first night).

4. Loki Tiki Mug - which will be perfect for binge watching the Loki series.

6. Kiwi Package: Includes the Tom Hiddleston M2 Magazine cover, Colour Me Good Tom Hiddleston coloring book, and we will even include the color pencils. (Donated by @amazingeddieredmayne)

10. Time Out and GQ Magazine package. (Time Out Magazine donated by @sylindria)

Right now, millions of children are in danger. They face violence, disease,  hunger and the chaos of war and disaster. Unicef ensures more children get life-saving food, vaccinations, education and protection than anything else. With your help, we can build a safer world for children. unicef.org.uk

Right now, millions of children are in danger. They face violence, disease, hunger and the chaos of war and disaster. Unicef ensures more children get life-saving food, vaccinations, education and protection than anyone else. With your help, we can build a safer world for children. unicef.org.uk