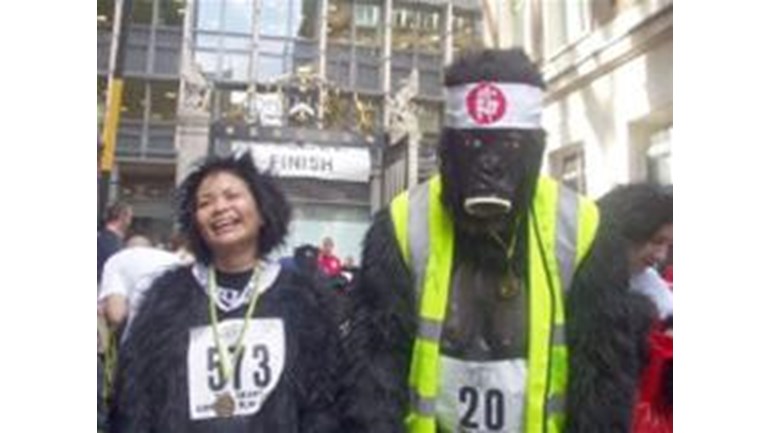 Fundraising for The Gorilla Organization

Thanks for visiting our fundraising page: please dig deep and sponsor us online. Donating through this site is simple, fast and totally secure. It is also the most efficient way to sponsor us: The Gorilla Organization (formerly the Dian Fossey Gorilla Fund) will receive your money faster and, if you are a UK taxpayer, an extra 28% in tax will be added to your gift at no cost to you.

http://www.japanesetranslations.co.uk/bujinkan/ozaru-run.htm shows how in 2004 & 2005 Ben Jones and Mirka Higgins (with other friends in each year) joined over 500 other humans running through London to raise funds for the 650-700 mountain gorillas (only!) left in the wild. Each year we raised over 1000 pounds, but so much money is needed to help support these Great Apes -- and just as importantly, the human communities around their habitats -- that we wanted to raise at least double that in 2006. We already made that target by the time of the run, but let's see how much higher we can still get! We welcome all support & sponsorship, and remember that donations from companies are even tax-deductible (you can include a link to your website in your comment).

The 2006 team consisted of Ben Jones, Mirka Higgins, Annette Paul (nee Beake), Seb Palmer, Noriko Jones and Mike McGrath -- all completed the course successfully and had a great time, although Mirka had just reemerged from hospital before the run (throat cyst operation), Noriko sprained her ankle after only 1 km so hobbled the rest of the way, and Ben ended up with "jogger's nipple"... Lots of photos can be seen at www.event-photos.co.uk/buy.html (look for gorillas with Japanese headbands, e.g. numbers 15, 20, 176, 421, 573, etc.), and there are also some on www.flickr.com/groups/greatgorillarun2006/pool/

Keep your eyes on this page and also www.gorillas.org/greatgorillarun as we're certainly hoping to take part again next year, with an even bigger team. You don't need to be a marathon runner to take part -- it's a 'Fun Run' not a race, and many people end up walking most of it anyway. Next year's page will probably be up from January at www.justgiving.com/ozaru2007 once this page is 'frozen'.

With just over 1000 mountain gorillas left in the world and three subspecies now critically endangered it is vital we do everything we can to save gorillas from extinction. We protect them from poachers, safeguard their forest home and help local people conserve the environment. Will you join us?