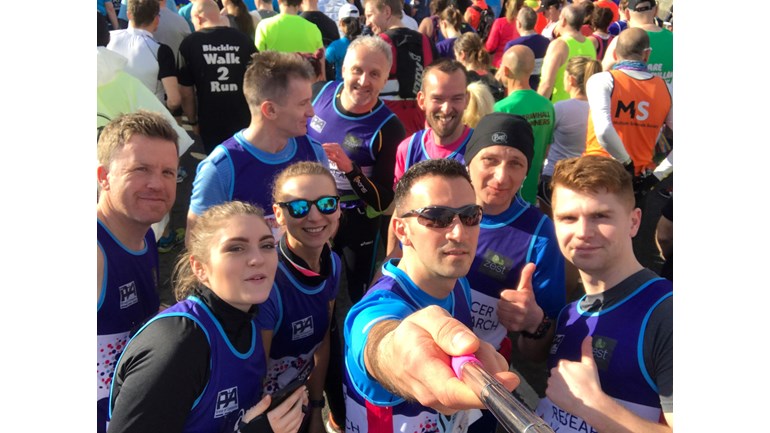 Support us on our 1,000 mile challenge for Cancer Research UK because we're still fundraising!

As a growing company we are committed to employee fitness and long-term well being as well as supporting our community and raising money for charity.

At the beginning of the year, we picked Cancer Research UK as our chosen charity for 2017 and set ourselves a goal to raise £10,000 for this charity that helps so many. Already, we have well exceeded that target and have currently raised over £15,000!

Our latest event was the Flintshire 10k Road Race...a team of 45 staff entered and completed the event!

Steve Morgan, P&A Managing Director said that he was delighted at the response from employees in signing up to make up the 45 strong team of runners, and loves the fun idea of everybody running in panda style costumes.

Another recent event was the Chester Marathon on October 8th where 23 P&A employees took part, showing true determination to finish the tough course.

Our Managing Director Steve Morgan and Fencing & Timber Buildings Manager, John Vaughan are taking part in a number of tough challenges across the year, which will see them complete a total distance of 1000 miles each.

Many of our employees have and will join them along the way on some of these challenges and already we have achieved so much.

But, that's not all we've been up to! Here are just a few of the events we have completed this year...

Managing Director Steve Morgan said: “I am so proud of all of our staff who have committed themselves to taking part in these tough challenges."

“It has been a huge challenge, but knowing we are able to raise money for such a good cause makes it all worthwhile.”

We chose Cancer Research UK as our chosen charity as many of our staff and close friends of P&A have faced the impact of cancer. Also, one member of our staff is currently undertaking treatment and we want to show our support.

The fundraising is also in memory of Howard Hughes who worked at P&A who passed away last year.