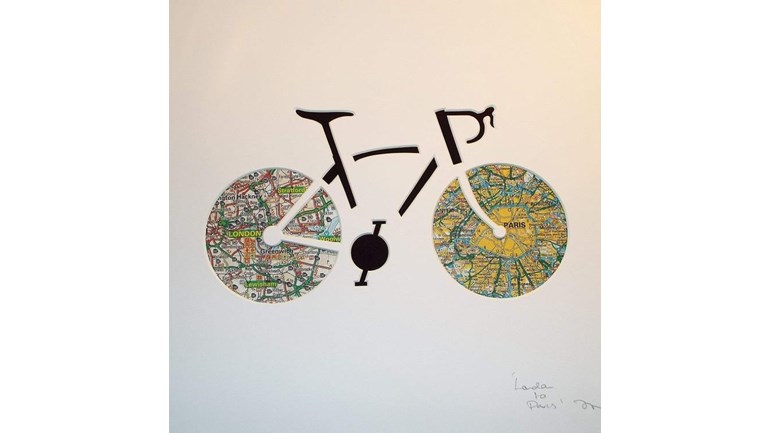 We're riding to Paris for JDRF because our children are living with T1D & we need a cure!

On June 27th, 9 men & 3 women with varying levels of fitness and varying quality of bike will set out from South East London to cycle to Paris. We have been brought together on this mission by our kids, all of whom live with Type 1 Diabetes. We are the Diabetes Parents to Paris!

It'll take us 4 days, hopefully of glorious weather, rolling through the French countryside, having the odd verre de vin, once the day is done, and eating plenty of gateau during the day. After all, we need to keep our strength up. The only "pain" will be of the baguette variety!

Our first 2 days will be the toughest, cycling 108km each day, with a more leisurely 55km on day 3, and a 45km roll into Paris via Versailles on the last day, before we hop gingerly onto the Eurostar back to London.

Why JDRF? Because they fund type 1 diabetes research to improve lives & one day eradicate the condition for good. Your support will help do that, so that withing the lifetimes of our kids, there will be a cure. Imagine that, no more finger prick test, no more injection, no more canulas, no more sensor inserts. Our kids have upwards of 2500 needles in their bodies each and every year, and will until there's a cure. Your donation, however large or small, will be very gratefully received.

Kev, "le patron" of the parent peloton, and father to 18 year old Amy, who was diagnosed 8 years ago. She's using a DanaRS pump which we've turned into a DIY closed loop artificial pancreas using AndroidAPS. Kev has been known to 'go on a bit' about Nightscout and DIY looping.

Andrew is riding for his daughter, Bia, 13, diagnosed 8 years and using the Accuchek insight pump & very occasionally Libre flash glucose monitoring. Andrew has done many bike-related challenges since Bia was diagnosed for JDRF, the proudest being 2 years ago when they cycled the 60 miles from London to Brighton together and raised over £14,000 for JDRF. Bia particularly hates feeling hypo & hyper, so the sooner we find a cure, the better.

Vince is riding for his daughter Paige diagnosed 8 years ago at age 5 life changed for her and for us from that point on and although we have had tears and tantrums this is mainly from us as Paige never lets it get in the way. We’re proud of everything She achieves. Research has enabled her to gain better control on some form of normality by wearing a Medtronic pump and sensors. Riding to be part of the cure.

Matt is riding for Amy 18 diagnosed 5 years. Using freestyle Libre with Libre link on MDI although I wish she would go back on the pump as we had much better control. Hoping for Omnipod trial in the coming months. Any advancement towards helping manage this condition is welcomed but has to fit in with an image conscious teenager!!!!!!.

Megan is mum to Charlotte aged 19 and diagnosed when 15. She has an Animas Vibe pump with Dexcom G5 and xdrip+ and is lowish carb. She takes it all in her stride, lives life to the full and manages to fit in competitive cycling. First charity challenge for me but also doing this for my sister and niece who have been type 1 for very many years. Just hope my arthritic knees will cope with the hills!

Svenia is riding for her son Mattie aged 9 , diagnosed aged 7. Type 1 is life changing for both parents and child but the resilience of our T1 children living with this is amazing. Riding for a cure one day. We live in hope.

Ian is dad to three children one of which Connor was diagnosed with Type 1 diabetes 4 years ago. Their world has definitely changed since that day and they cope the best they can on a day to day basis. Connor takes its all in his stride and uses an Accuchek Combo pump and Dexcom G6 CGM to manage this condition and doesn’t let diabetes stop him doing what he wants and leads a very active lifestyle despite not having any hypo or hyper awareness - and he hates those!
Ian has previously completed Nightrider raising funds for JDRF and has become a keen cyclist because of that. Ian is riding in the hope that the funds raised will support the research for a cure as we #WeAreNotWaiting. Ian hates hills and so is hoping France is as flat as everyone says.

Andrew & Kate are riding with their son, Jack, age 16. Jack was diagnosed 8 & 1/2 years ago and he uses a DanaRS pump with a Nightscout linked continuous glucose monitoring system. They are riding in support of JDRF to help raise money to provide funding to find a cure for Diabetes, a disease which affects children and their families all over the world. Jack has bravely lived with diabetes showing great courage and a sense of humour throughout, supported brilliantly by his Mum & brother Fin - having ridden a bike around the Lakes for his D of E silver award, Jack now wants to take on London to Paris. Diabetes doesn’t give its victims and their families any time off and we look forward to any improvements in its management and eventually a cure.

Steve is riding for his daughter Poppy who was diagnosed 18 months ago aged 10. Poppy has been amazing since this life changing event and is supported by her older sister, Liberty, although Liberty still can’t watch the injections! Poppy is carb counting using the expert meter and injections but is starting to consider a Freestyle Libre.

Lewis, father of 2 but in particular 3 year old Oliver who was diagnosed in December 17, it’s been a long but fast paced learning curve of highs and lows but he’s getting through it better than us. Oliver isn't on a pump yet but does have a dexcom G6.
Oliver keeps surprising us with his attitude and acceptance of they way his life is now, riding to make his life better.

Michelle is riding for her Son Oliver. Oliver is 7 years old, he was diagnosed with Type 1 Diabetes 3 years ago. Since diagnosis Oliver has shown true strength and maturity, he has taken part in some fundraising for JDRF. He understands that the work they do is invaluable to his future and other Type 1's. Doing this ride is going to challenge Michelle massively, as on signing up she didn’t even own a bike! She is hoping that not only will doing the ride raise lots of money but also much needed awareness.

Beckie is riding for her daughter Daisy, aged 11, who was diagnosed at 8 years old. Living with and managing type 1 is a huge challenge and this is Beckie’s first sporting event which has been very much inspired by Daisy and all that she does! Daisy is a keen triathlete herself and has not let her diagnosis hold her back! Beckie is riding for a cure for her type 1 hero and all the others living with this condition.

Charity Registration No. 295716
Find out more about charity fundraising