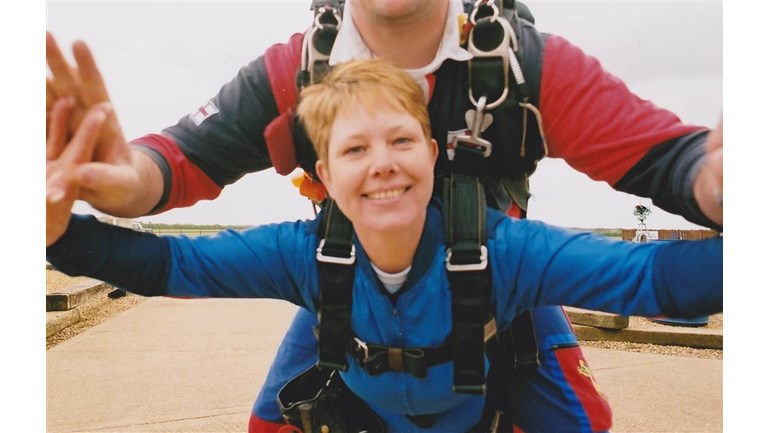 On June 8th of this year I am doing a Skydive in memory of my late wife, Tracy McGrath. I am doing it with one of my best mates, Andy Taylor, so we can support each other (and see who screams the loudest), as in truth, we are both terrified of doing this.

I am doing this in memory of Tracy who sadly passed away in October 2017, due to non-Hodgkins Lymphoma. She was diagnosed in 2008 and over the years she underwent several spells of Chemotherapy, Radiotherapy and Stem Cell transplant. Following a relapse in early 2016 and another period of Chemotherapy, she underwent her final Stem Cell transplant in July 2017 and unfortunately due to complications and infections she fell seriously ill and died in hospital on 26th October 2017. Although she lost her battle against cancer, the fact that she was able have a final chance through the Stem Cell transplant to try and get an ultimate cure was something Tracy was happy to do and very enthusiastic about, as well as being grateful to the Anthony Nolan Trust which facilitated finding a 100% match for her.

My wife did a Skydive back in 2005 for her 40th Birthday, and raised a vast amount of money for the NSPCC. Some pictures of her doing this are below. She absolutely loved it and showed no fear (unlike me). She always wanted me to do it, and I half heartedly said I would do it for my 50th Birthday, which I conveniently managed to avoid. My wife was a very positive person who lived life to the full and did many charity events to both raise awareness and money for good causes. In some way I want to honour her life and memory and this simple activity of throwing myself out of a plane will go someway to that (albeit a terrifying prospect for me). I also know she would be finding it hugely amusing and funny how terrified I am of doing this and she would be full of laughter while she wound me up about it, but I also know how proud she would be that I am doing it and having another fantastic memory we can share.

Anthony Nolan was a cause very close to Tracy's heart, and thanks to them, gave her another chance to try and beat her cancer which she had dealt with for 10 years. I know she would be very grateful to Andy and myself for doing this Skydive and all to the people who donate to this wonderful charity. She was also very keen to raise awareness of Anthony Nolan and what they do, and how easy it is for people to register on their Stem Cell register and to provide Stem Cells if found to be a donor match. I urge people to spend a few minutes looking at what Anthony Nolan does and to seriously consider becoming a donor. For doing something as simple as a mouth swab and if found to be a match, spending a couple of hours having Stem Cells collected (which is a painless and simple procedure) you could potentially save someone's life.

Charity Registration No. in England and Wales 803716, Scotland SC038827
Find out more about charity fundraising