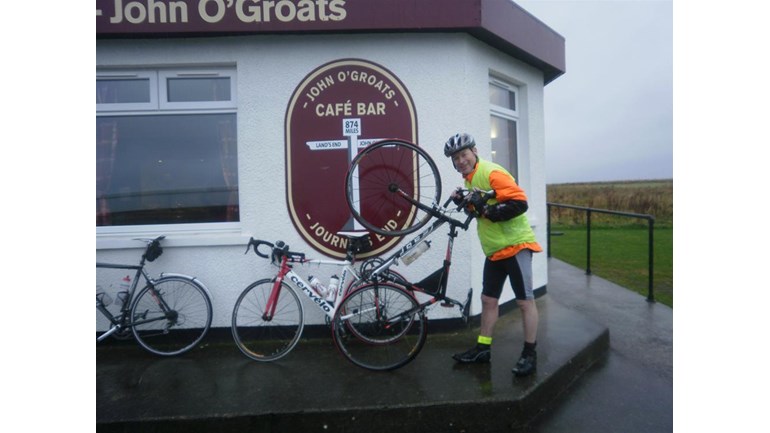 Fundraising for ABF The Soldiers' Charity

Weather turned really bad. Head winds of 30 mph somehow combined with fog and driving rain. Serious gradients along the coast road. Never even saw the sea. Very tough 100 mile day. Cold and soaked for 9 hours. Great feeling to arrive at John O'Groats though. Amazing to finish. Knee swollen up but I made it. Whiskey in the cafe and registered in the End-to-End book. Then 100 miles back to Dingwall by minibus, but dry!

Another 6 am start, but in my case, it was to Inverness Airport. £85 (Sleazy Jet) invested in NOT taking 14 hrs in a minibus back to Aldershot.  Well worth every penny! Great to be home!

Anyone who knows about cycling will tell you that the near 1000 mile trip from Lands End to John O Groats is NOT to be taken lightly. It's ALL up-hill and takes months of training.

The 8 regular soldiers leaving in late September know this well.  They have fearsome backgrounds - triatheletes and 'ironmen' etc.The varied bunch of  soldiers - para & commando trained and scariest of all - a Sgt Major from the Physical Training Corps have been training hard since April.

Paul however knows none of this. He just cycles to work at the police station - a Middle-Aged-Man In-Lycra ( or MAMIL).

While the team have been doing gruelling  hill training of back to back 90 milers to simulate the tough conditions of 10 days cycling in the hills, Paul has drifted from home to work after 10 miles, sweating and complaining about being sore.

With barely 10 days to go, Paul signed up afresh & wheezed out 50 miles (about half a day's worth) before collapsing back on the drive, thinking he'd give 1000 miles a go.

Even the bike belongs to a pitying mate, as this cheapskate's ancient racer would have collapsed on the first hill almost as fast as the rider.

Please sponser this most ill-conceived attempt at 40 back-to-back marathons, if only for the amusement of the professionals in the team. Your money is well spent on a great cause, even if this lycra warrior and most part time soldier doesn't make it out of hilly Cornwall.

Day 1 20th Sept 2010 Lands End to Oakhampton training camp. Up at 05.45 to leave RNAS Culdrose, sun out 20c with 8 mile an hour tail wind. Covered 102 miles  with average speed of 16.7 mph. Started ride 09.15 from Lands End  and got to Oakhampton camp at 16.30hrs. Photos at Lands End hardly anyone there, felt great, gentle hills views much nicer than they are by car. 20 miles into A30 came to roadworks which said cyclists must find alternative route! Got lost and added 8 miles to the day.  Didnt get lunch until 65 miles in,(starting to get very painful at 55 miles)then got half hour at Bodmin shell station.  Missed afternoon break and just hit it for last 40 miles on A30 to Oakhampton. Started to really hurt wrists neck and arse, got blisters and couldnt feel toes! Big hill before oakhampton was really painful  tough got into oakhampton shattered. Tough day but fun! PO