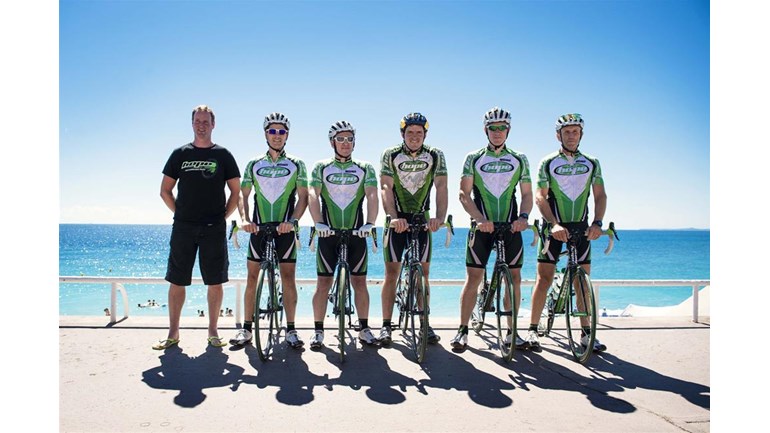 After almost a year in the planning the Pedal de Alps project came to a highly successful ending on the sea front in Nice as the five strong team headed by twelve times FIM Trial World Champion Dougie Lampkin arrived on the Promenade de Anglais to rapturous applause having raised over twenty thousand pounds and rising for Derian House thanks to their epic adventure. Since leaving Derian House in Chorley two weeks before, the team had covered over one thousand miles and climbed over thirty-five thousand metres for this personal and worthy cause.

The thirteen day trip proved to be a journey of a lifetime with long standing Red Bull athlete Lampkin being accompanied by his long time friend Paul Dixon, his cousin James Lampkin, Hope stalwart Woody Hole and his manager Jake Miller. The five friends were joined by a series of guest riders along the way with World downhill mountain bike champion Steve Peat being the first on the opening day.

Speaking about Pedal de Alps Lampkin said. “To have made it to the finish is a special feeling and one that I am very proud of, especially when you remember what we were riding for. To have raised over twenty thousand pounds for Derian House is just incredible, as it is such a worthy cause.”

“It was hard preparing for this project as I didn't really know what to expect. Normally when I am training I know what I am training for, but with Pedal de Alps it was different as it was a challenge rather than a competition, and one that I didn’t fully appreciate before we set off.”

“In the end Pedal de Alps has been an amazing challenge and one of the toughest of my career, but one that I have enjoyed massively. It is the first time I have really had to ride as part of a team, but it was a great experience to be part of that combined spirit, which has been key to getting us all across the line in Nice.”

“Having pedalled over one thousand miles and up some of the biggest and most infamous climbs in Europe, I am now looking forward to getting back on to a motorbike as soon as possible.”

After the initial one hundred and twenty five mile leg from Chorley to Hull, the guys made the overnight ferry crossing to Belgium before they endured three tough and difficult days in the saddle with rain and strong headwinds hampering their progress through the flat lands of Northern France. The sight of Lake Geneva high from the hills above on day six certainly lifted spirits in the squad as they then headed to the French mountains for some serious climbing.

Over the next five days the Pedal de Alps team successfully negotiated most of the major and famous climbs in the Alps, many of which have featured in the Tour de France. These included Col de la Colombiere, Cormet de Roselend, Col del L'Iseran, Col du Telegraphe, Col du Galibier and the highest of them all La Bonnette at 2802 metres. Irrespective of the terrain the team worked as a solid unit with one goal, which was to get all five riders safely to Nice whilst continuing to raise money for Derian House.

The closing couple of days and less frantic schedule allowed the team to fully enjoy the overall experience they had been part of and to reflect on their incredible feat of pedalling from Chorley to Nice via some of the biggest hills in Europe. The last few miles to the sea front in Nice where the forty strong welcoming party awaited them, including triple FIM Trial World Champion Thierry Michaud, proved to be an emotional climax to a hugely successful adventure.

Paul Dixon and his family became acquainted with Derain House - a specialist children's hospice for terminally ill youngsters during the short life of their son Harry who lost his battle with SMA Type 1 in June 2006, aged just fourteen weeks. (SMA is short for Spinal Muscular Atrophy and is a genetic disorder, affecting the motor neurons in the spinal cord)

Special thanks to goes to Hope for their immense support of this project from start to finish, to team technician Nick Owen, to JD Cycles, Torq Fitness and Biketreks for their kind assistance, to Red Bull and P+O Ferries for their contribution, to the respective families for their patience and understanding, to all friends, acquaintances and all those who have donated to this incredibly worthy cause.

In the end, the Pedal de Alps story was a simple one - five guys - one thousand miles - one cause.

At the time of writing, the total raised is now in excess of twenty one thousand pounds, and continues to rise.

To learn more about the challenge, Derian House and Harry please visit www.pedal-de-alps.com

Donating through JustGiving is simple, fast and totally secure. Your details are safe with JustGiving – they will never sell them on or send unwanted emails. Once you donate, they will send your money directly to the charity and make sure Gift Aid is reclaimed on every eligible donation by a UK taxpayer. So it is the most efficient way to donate - we raise more, whilst saving time and cutting costs for the charity.

Derian House Children's Hospice provides specialist care and respite to children and young people with life-limiting or life-shortening conditions. We cover the South of Cumbria, the entire of Lancashire and the North of Manchester. To provide our services in 2019 the cost to us stands at over £4m.