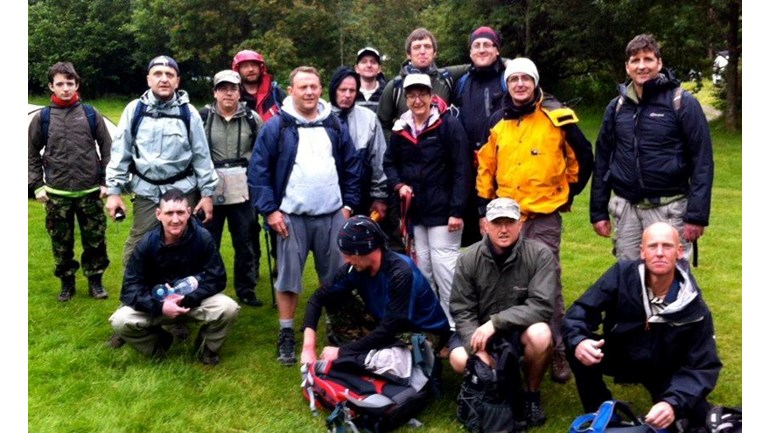 Mountain walking to raise Hepatitis c awareness & for The Hepatitis C Trust because Their work & website help save lives !

The Hepatitis C Trust is the national UK charity for hep C. It was founded and is led and run by people with personal experience of hepatitis C. We work to deliver a whole range of services including awareness and testing, advocacy and support with the ultimate goal of preventing unnecessary deaths.

2012 is Britain's Olympic year, as well as being the 100th anniversary of Scott's expedition to the south Pole, it is also the first year of my recovery post HCV treatment & the year in which I've chosen to take up the challenge of the Three Peaks, to reach the summits of mount Snowdon in Wales, Scafell pike in England & Ben Nevis in Scotland. Raising hepatitis c awareness & funds for the Hepatitis C Trust in London into the bargin.

In January 08 I began a 6 month course of treatment of Vireferon & Rebetol, it was a very difficult time for me & my son, who really stepped up to the plate & looked after me at my worst. 12 months later the following January 09, we received the news we were dreading... Virus still detected.

The following morning of the result I logged on to the web using my laptop & visited the Hepatitis C Trusts website for the first time, I emailed them & Catherine Corr replied 10 mins later, offering a chat, I called her & we talked it through. I didn't know it then but my comeback had already began.

Through the trusts website a world of information came into view, vital information that would help me rethink my situation & arm me with the knowledge to move forward. I set about getting fitter, walking every other day & by October 09 I was ready & willing to do treatment again , only this time it would be for 12 months, my son felt he couldn't go through another 12 months of my moods (treatment effected my mood ) & who could blame him. My mother, who had also brought him up, had passed away in January 07, so all in all it had been a bloody hard two years & now I was asking him to go through another 18 months of hell.

He stayed by my side & in October 2009 treatment began again, only this time I was very well prepared, putting into practice all I had read through the trust & other sites along side lessons learned from my first shot at treatment, & so another 12 months of treatment began...

In March 2011 we got the news we deserved... SVR, sustained viral response. Success !!!

Now in 2012 after a hell of a year post treatment with depression along with varying post recovery health issues I now feel ready to fight another battle. That of the three peaks challenge & so having linked with the Hepatitis c Trust, Hi we can help & Compass drug & alcohol York with others yet to confirm their backing.

[ Update 16.5.12, the British liver trust have now agreed to host our story, on an awareness basis. ]

I once tweeted... Hepatitis c now killing more people than HIV, shout it from the rooftops. Well I aim to do better than that on the 28th July world Hepatitis day, we will be shouting a number of fact based HCV related messages from the highest points up & down the country. full details will follow, we also want others to do likewise, by reaching the top of a peak in any country & help relay our messages around the world. We will beacons of hepatitis c awareness, using one of the oldest means of communication combined with the most modern, only our beacons will be facebook & twitter

We are also looking for sponsorship, there will be plenty of media interest generated by the organisations involved & by the individuals & their related stories. Everyone involved gets a mention & their logos will be posted on the challenges website.

In my opinion actions speak louder than words, so please get involved & help us do some good.

Visit my blog to find out what's happening...

UPDATE; 12.6.12... I'm struggling here guys, need help spreading the word, seems I'm totally on my own in this thing... Reminds me of being on treatment.

The Hepatitis C Trust is the national UK charity for hep C. It was founded and is led and run by people with personal experience of hepatitis C. We work to deliver a whole range of services including awareness and testing, advocacy and support with the ultimate goal of preventing unnecessary deaths.