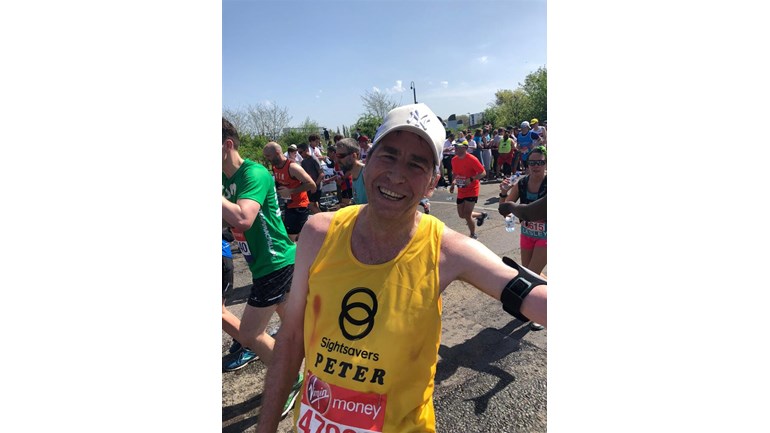 We support local partners around the world to combat avoidable blindness.

I did it! The picture above is at mile 17 with just 9 miles to go. Blow by blow account in updates section below but it was not pretty with a hamstring injury and cramps and 80 minutes slower than my last attempt in 2014. But together we have raised over £7,400 (inclusive of gift aid) for Sightsavers which is truly amazing. Thank you so much.

I turned 60 this February and wanted to celebrate this by running to support this great charity. This was my sixth London marathon since my wife and kids told me (with good justification) in my mid-40s that I was going to seed so I am indebted to them.

As a general surgeon who has served in a Kenyan mission hospital I've witnessed first-hand the devastating damage that blindness can do to individuals and communities but also know how effective and cheap preventive and curative measures are.

As CEO of Christian Medical Fellowship I'm deeply committed to healthcare in the developing world.

In five previous marathons between 2004 and 2014  friends and colleagues generously helped me to raise over £25,000 for Whizz Kidz, Alzheimer's Society, Down's Syndrome, Help the Hospices and Christian Blind Mission so this latest effort brings the grand total to over £30,000.

If you still want to give it is not too late.

Sightsavers' vision is of a world where no one is blind from avoidable causes and where visually impaired people participate equally in society.

Charity Registration No. 207544
Find out more about charity fundraising