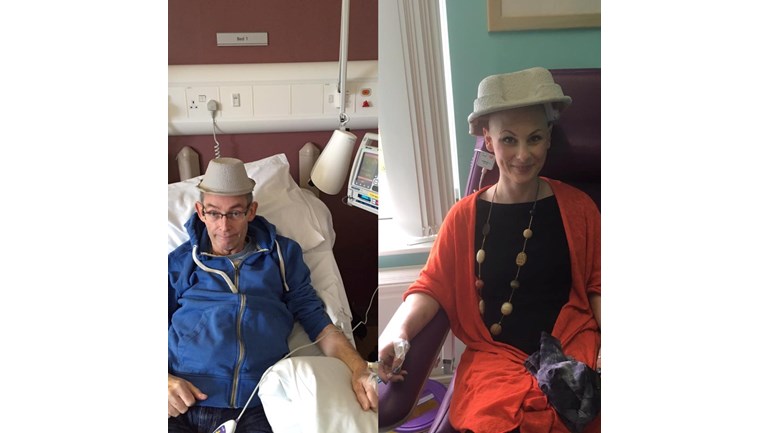 In April 2016, my brave, witty, and loving husband, Phil - superdad to our young sons Alex and Ben - passed away after a two year fight against oesophageal cancer. He had been through several rounds of chemo, an oesophagogastrectomy (followed by several days in ICU,) followed by more chemo... and then palliative care. He never gave up, never stopped working, and although the end came very suddenly, he used his inimitable brand of Tumour Humour right up until he died.

Four months later, I was diagnosed with breast cancer. Stage three - precisely the same as Phil's. I had to manage early widowhood, two surgeries, months of chemotherapy, radiotherapy, AND keep our business going and our recently bereaved children fed and happy, without him there to hold my hand or to reassure the boys that I wasn’t going to die as well. Oh yes, and I also had to walk the bloody dog every day (the dog was Phil's idea - he's still not quite forgiven for that.)

Fabulous friends and family helped us enormously, but the main thing that kept me going throughout was the memory of Phil's positivity and good humour, despite his survival chances on diagnosis being lower than 16%. My survival chances are brilliant - simply because I was lucky enough to have breast cancer. Nobody thinks they're lucky to have breast cancer... but I did. I'd seen how much worse it could be.

There is a huge discrepancy in the amount of funding that goes into oesophageal cancer compared to breast, and I feel particularly fortunate that I've benefited from years of research - especially because our children now don't need to face losing another parent. However, it saddens me deeply that research into Phil's type of cancer is so far behind.

In his memory, I'm going to run a marathon - partly to celebrate how well I now feel having received the all clear, and partly to prove to the boys that I'm OK, and that I have a long life ahead of me. I also thought it would be far easier to train for a marathon than it would be to deal with chemotherapy, widowhood, bereaved pre-teen twins, and an idiot puppy (but come back to me on that one in a few months.) The main reason for choosing the London Marathon, though, is because Phil - as the voice of “Mind the Gap” (among many other things) - will be with me all the way, announcing Underground trains below the roads I'll be running along. He never wanted to stop working, and he still hasn't. He’s left a bloody big gap, though.

Worldwide Cancer Research have assured me that all the money we raise will go specifically towards research into oesophageal cancer... and hopefully, between us, we can help to "Phil The Gap" between the survival rates for oesophageal and breast cancers.

Thanks so much for chipping in!

Read more about Phil at www.philsayer.com

Charity Registration No. SC022918
Find out more about charity fundraising