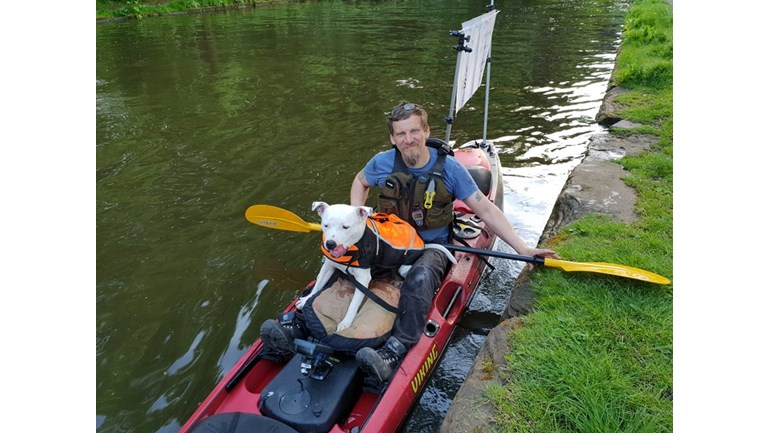 We are paddling 200 miles in 8 days for RSPCA Warrington, Halton & St Helens Branch because they help abused & neglected dogs get a 2nd chance

We rehabilitate abused & neglected animals to get them ready to find new homes.

In 2016, Max and I kayaked 100 miles and raised over £3000. We have witnessed the difference the money raised has made to many dogs at the RSPCA Warrington branch. Following, the generous and overwhelming support from our last voyage, we have decided to quite literally, push the boat out for one last big effort!

We are going to be kayaking from Oxford to Warrington, a total of 200 miles in 8 days. This works out at 25 miles per day which gives me the demanding task of paddling a marathon per day! My paddling companion Max, enjoys his time on the kayak so much he's been given the nickname, Pirate Max! You will often find Pirate Max around the Walton Garden area as we train for the big challenge.

My wife, Kei, and I volunteer at the centre and have witnessed the fantastic work they do and we love to see the difference a few weeks of love and care can make to their lives.

We adopted Max, a staffie who was abandoned by his owner. Through no fault of his own, he had to spend over a year in kennels. The staff at the centre gave him lots of love and we decided we had to take him home to be a little brother for our other dog, Diesel. Since then, we have decided to make it a trio and have adopted a Pomeranian, named Bo from the branch.

Pirate Max will be joining me on my challenge and we have already got him kitted out in his life jacket.

The RSPCA Warrington is a cruelty case boarding centre. This means that the animals in their care have been removed by Inspectors due to neglect or abuse. They are cared for by their team of staff and volunteers until the prosecution cases come to an end. Once the cases are concluded the animals are signed over and they can begin the process of finding them a permanent and loving home. It can take time and patience due to the severe neglect and cruelty they have experienced.

I want to help, give these dogs a brighter future by raising money and awareness so, they can help more dogs have a second chance.

I will begin my journey on Sunday 16th September. I plan to finish around 1pm on Sunday 23rd September.

We will be travelling for 8 days and sleeping overnight in my tent alongside the canals I'm travelling through. I will be kayaking for around 8 hours per day.

We rehabilitate and care for abused and neglected cats and dogs. All our animals are brought to us by national RSPCA inspectors after being rescued from cruelty. We serve Warrington, Halton, St Helens and the surrounding areas (including Lymm, Frodsham, Helsby, Prescot, Knowsley and Rainford).

Charity Registration No. 232259
Find out more about charity fundraising