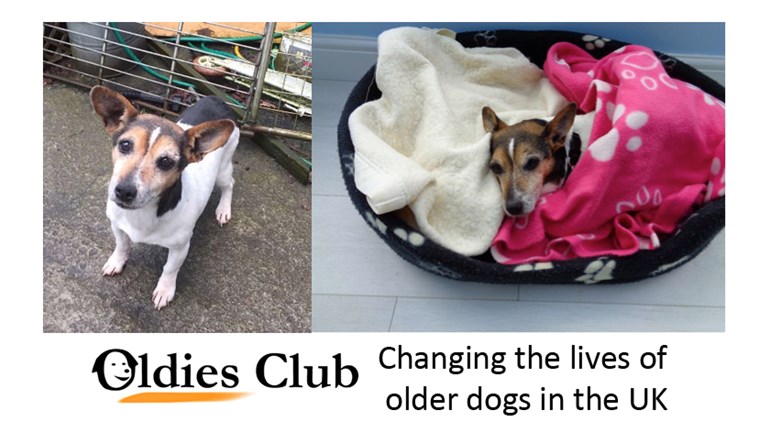 Hoping to raise thousands of pounds for Oldies Club because it has to cover Patch's rather large vet bill!

Oldies Club is a dog rescue charity which is run by volunteers and helps dogs aged 7+. It often takes in dogs that have been neglected, resulting in large vet bills. Oldies Club places dogs in foster homes, where they are assessed and receive any veterinary treatment required before being rehomed.

~ Little Patch is a very sweet little Jack Russell Terrier, who came into the care of Oldies Club, a small volunteer-run charity that rescues and rehomes older dogs in the UK, in December 2017, due to her previous owner's ill health.

Update 2 September 2018: Patch had another scan in the summer and the vet could find no traces of cancer. We are all so pleased with this wonderful news, none more so than Patch's foster mum, who has decided to adopt her :-). We are delighted with this outcome for Patch.

Thank you very much to those who donated to Patch's vet bills. If anyone else would like to contribute, we'd be most grateful.

Update 21 June 2018: Thank you so much to everyone who has donated towards Patch's vet bills so far. We have updated the target amount today, to include the bill we have received for Patch's chemo sessions. Little Patch is due to have another chemo session next week. She was tired in the beginning after a previous session, but has been fine with the most recent one. Described as 'full of beans and very happy', which also made us very happy :-)

Patch is then due to have a scan in July to see whether she may require further chemo.

Patch is currently at the vets, recovering after her second surgery, so she has had some assistance in telling you her story ...

Hello, I'm Patch. Sadly, after arriving in the care of the wonderful Oldies Club charity, I was found to have obvious mammary lumps and, following a prompt visit to the vets, the charity was advised I would require two operations, the first of which would remove the tumours on one side and have them sent for analysis, with the plan for the second side to be operated on at a later date.

I had my first surgery in February 2018. I was a little woozy, but received lots of love and care while at the vets. I had two tumours removed from my right side, which were sent for biopsy. Following this, my case was referred to an oncologist, who advised that I sadly had a very aggressive mammary cancer. They had removed all of the tumour and local margins and lymph node on that side and it was felt the other side would be a copy of the first and they should be able to remove all from the second side too.

Oldies Club was advised that I should have a CT scan and some samples taken and, following this, the vet informed them that I had a life expectancy of three to six months if I was left without any further treatment :-(. Following veterinary advice, Oldies Club agreed for me to receive the recommended surgery to remove the remaining mammary tumours, along with chemotherapy, with surgery to be carried out at the specialists this time.

I had surgery on the second side a few days ago. It had been pre-arranged for me to stay at the vets for monitoring and pain relief for a few days and Oldies Club has been advised the operation itself went well. One of the vet nurses looking after me called my foster mum this weekend to let her know I am doing well, have been having my pain relief and, very importantly, enjoyed my evening meal. I usually eat my meals with great gusto, so this was very welcome news for all the humans worrying about me! I was was sleeping peacefully at the time of the call.

Oldies Club is hoping i will be able to return to my loving foster home around 9th April. I know my foster mum is very much looking forward to having me back and I hear she's been stocking up on doggie treats!

Onto more financial stuff, Oldies Club had been advised that the cost of this surgery, with hospitalisation, would be in the region of £3,950-£4,450, so we have started this fundraising page with an initial total, incorporating the earlier vet bill, of £5954.59 and will revise upwards if necessary, taking account of the finalised vet bill and any future treatment costs.

This is a huge amount of money for Oldies Club to find, especially when I know it has many other dogs in its care to cover vet costs for too, with more waiting to come in, but without this surgery I was only expected to have a few more months :-( Everyone hopes I will now have the chance for a longer life expectancy and of course be happier and healthier for it.

I'm now asking all of Oldies Club's dog-loving supporters if you would please dig deep and donate whatever amount you can to help with the costs of my vet bills. You can donate from £2 upwards via this page and the charity truly will appreciate any amount you can spare. It is a lot of money for Oldies Club to find, but if around 10% of its Facebook supporters, for example, were able to donate just £2 each, the initial fundraising total would be covered, so I would really would be grateful if the Oldies Club community would join together in supporting this :-)

Should Oldies Club supporters be generous enough to donate more than is needed for my vet bills/care, any excess money will be directed to the charity’s general fund and used to help other older dogs in its care.

Thank you, in hope of your kindness.

Oldies Club is a dog rescue charity which is run by volunteers and helps dogs aged 7+. It often takes in dogs that have been neglected, resulting in large vet bills. Oldies Club places dogs in foster homes, where they are assessed and receive any veterinary treatment required before being rehomed.

Charity Registration No. 1118246
Find out more about charity fundraising