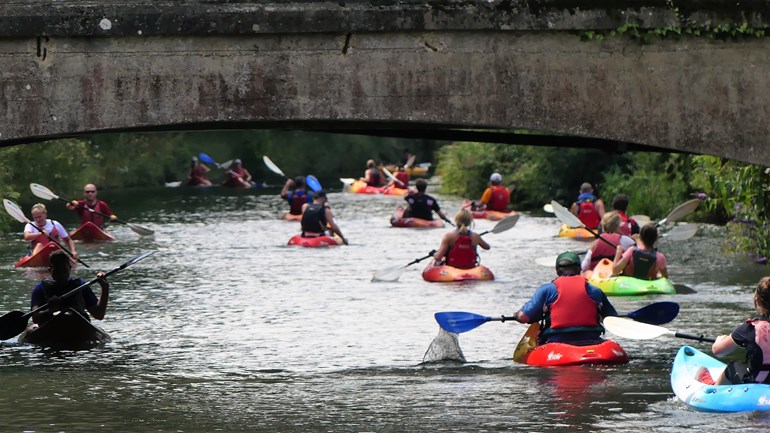 The fun annual triathlon that is PPP was first organised and run by Macmillan Cancer Support in 2005. In the early days, take up and participation was modest and as a consequence the event was not held in 2008.

However in 2009 Winchester Challenge Events Group (WCEG) volunteered to help organise the event on behalf of Macmillan. Several of the WCEG had previously taken part and believed PPP held great potential. Since 2009 the event has grown year on year and now has well over 400 entrants every year.

The route takes participants through special parts of Winchester and the surrounding District, helping to make this fun event all the more enjoyable. In 2016 a junior running event was added to the day helping to grow the family involvement within PPP.

Since 2009 the event has raised over £150,000 for Macmillan Cancer Support. It is supported with sponsorship from several local businesses who kindly return year on year. Once again we hope in this,  the event's fourteenth year, will see funds raised from the day exceed £20,000.

The aim of the organising team is to maximise the charitable contribution to Macmillan and to see the PPP profile raised, firmly securing this iconic event as an annual Winchester favourite.

Fundraising is hugely important to Macmillan. Without people doing events, running marathons, climbing mountains, and donating in all the other ways that you can, Macmillan wouldn’t exist.

This page is for general donations to Macmillan, sponsoring a member of the committee (as we can't compete), a marshal, or anyone who doesn't have a dedicated PPP Macmillan Just Giving Page.