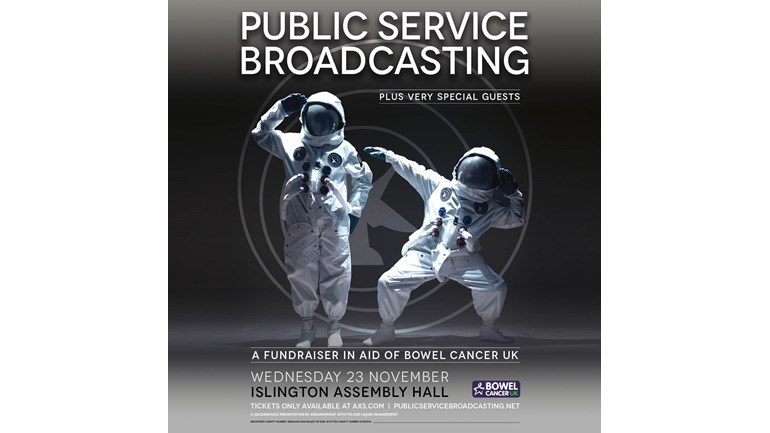 Public Service Broadcasting and very special guests will be performing at Islington Assembly Hall on Wednesday 23 November to raise funds for Bowel Cancer UK. This page is for those who would like to contribute but can't make the gig.

Every year in the UK, over 41,000 people are diagnosed with bowel cancer and more than 16,000 people die of the disease. Bowel Cancer UK is determined to save lives and improve the quality of life for all those affected by bowel cancer.

The band are particularly keen to raise funds and publicity for Bowel Cancer UK after personal involvement with the disease.

PSB’s guitarist and songwriter J. Willgoose, Esq., explained further: “In late September last year my wife, Sarah, was diagnosed with stage 3 bowel cancer at the age of 33, totally out of the blue. She has now completed her treatment and we’re hopeful for the best possible outcome, so as a band we really wanted to try to do something positive to help promote the great work Bowel Cancer UK do for patients and their families.”

Sarah said: “A lot of people – myself included, prior to diagnosis – would think of bowel cancer as a disease which mainly affects older people. We really wanted to draw people’s attention to Bowel Cancer UK’s ‘Never Too Young’ campaign and make sure that people of all ages are aware of the symptoms of bowel cancer and know that they should seek medical attention straight away if they notice any of them.”

Bowel cancer is the fourth most common cancer in the UK and the second biggest cancer killer, affecting both men and women. Every 15 minutes in the UK someone is diagnosed with bowel cancer. That’s over 41,000 people every year.

Bowel cancer is treatable and curable especially if diagnosed early. Nearly everyone diagnosed at the earliest stage will survive bowel cancer. However, this drops significantly as the disease develops. Early diagnosis really does save lives.

Symptoms of bowel cancer include:

* Bleeding from your bottom and/or blood in your poo

* A change in bowel habit lasting three weeks or more

* Extreme tiredness for no obvious reason

* A pain or lump in your tummy