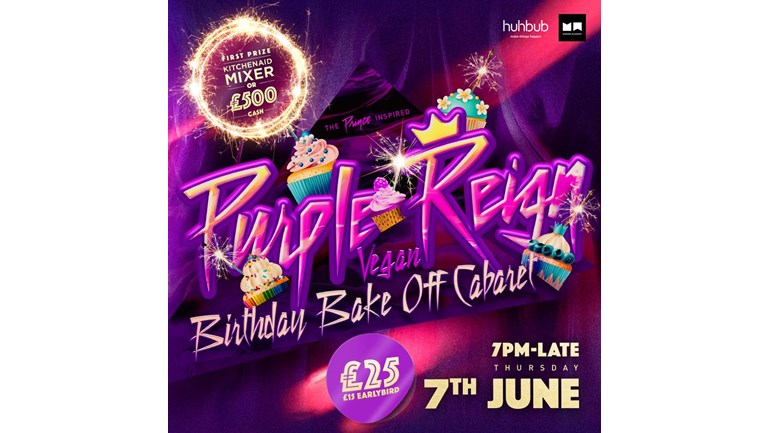 We believe every child should have the opportunity to learn about digital making. With the help of thousands of volunteers, we run a network of after-school coding clubs for young people aged 9 - 13

To celebrate what would have been Prince’s 60th birthday and his work in championing diversity in technology, Makers Academy, Europe’s top coding bootcamp, is hosting a Prince-inspired vegan bake-off cabaret on Thursday 7th June to help empower 100,000 kids in the UK to code.

Contestants are invited to pitch their ideas for a Prince-inspired bake (sweet or savoury) to purplereignbakeoff@gmail.com.The deadline for entries is Thursday 24th May. The 10 best ideas will compete at a special evening with Great British Bake-off-style judging, interspersed with comedy, magic and music in tribute to Prince on Thursday 7th June. The winner will receive a Kitchen Aid Mixer or £500 cash. See www.huhbub.com for full terms and conditions.

Prince was the inspiration for and supporter of YesWeCode, an initiative to train 100,000 low-opportunity youths in the USA to become high-level programmers.

Code Club UK aims to inspire the next generation, and believes that all children should have the opportunity, no matter who they are or where they come from. It was founded in 2012, and in 2015 joined forces with the Raspberry Pi Foundation, a registered UK charity. Code Club UK supports a nationwide network of volunteers and educators who run free coding clubs where young people aged 9-13 build and share their ideas, learning along the way.

We believe every child should have the opportunity to learn about digital making. With the help of thousands of volunteers, we run a network of after-school coding clubs for young people aged 9 - 13

The Raspberry Pi Foundation’s mission is to put the power of digital making into the hands of people all over the world. We provide low-cost, high-powered computers, make computing more relevant and accessible, and help people of all ages learn how to make things with computers.

Charity Registration No. 1129409
Find out more about charity fundraising