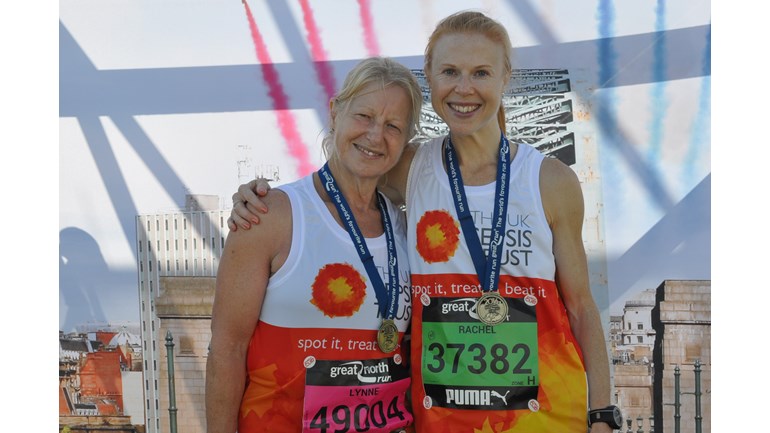 Mum and I are trekking the Great Wall of China for UK Sepsis Trust because I am a sepsis survivor!

Thanks for taking the time to visit my JustGiving page. Donating through JustGiving is simple, fast and totally secure. Your details are safe with JustGiving - they'll never sell them on or send unwanted emails. Once you donate, they'll send your money directly to the charity. So it's the most efficient way to donate - saving time and cutting costs for the charity.

Four days after a holiday to Turkey with my mum in July 2014 I began to feel unwell, but was flying to the Commonwealth Games and just tried to carry on believing it was cystitis. Over the next three days I became very unwell knowing something was certainly not right with severe leg pain, rigors, an elevated temperature, nausea, frequent urination. I was very scared but put on a brave face, took paracetamol, and flew home knowing that was all I could do. Pharmacists believed I just had a water infection. On touching down I cried with relief knowing I'd soon be home, by which time I'd faded so much my husband had to carry me from the car. He was determined to get some food down me and help me feel better, but everything made me sick and I couldn't keep liquid or solids down. Just the smell of food, cleaning/beauty products etc made me sick. I stopped urinating and again had a fever. After three visits to the emergency walk in clinic and knowing I was seriously ill I was finally admitted into hospital. I'd been sent home three times having been told it was a water infection. I just knew it was more than that. I can only describe it as a feeling of slipping away and a knowledge your body is fading and packing up. I couldn't eat, hear, see, move, or walk properly and the leg pain was excruciating. I thought I was going to die. When two ICU nurses visited me on the ward and said they were taking me to ICU I knew it was bad. I thought that was it. The rest, in a morphine-state, is a blur. I had a catheter fitted and woke up on my first wedding anniversary over a stone heavier from fluid retention and kidney failure. I was rushed to the renal unit in Oxford -  my consultant David saved my life. The right combination of antibiotics and dialysis began to work and the worst case scenario was a kidney transplant - that was the best news of my life at that time! I'd survived urosepsis. To this day they don't know why or how I became so ill.

I have to be mindful of what I do post sepsis as I can't manage as much as I used to. People wrongly assume that I am OK - I look fine but they don't have to live with (or put up with!) me at home, so they don't see the symptoms I suffer with or know about the trauma certain places or dates in the year cause me. I get tired and cold very easily, I suffer with brain fog, and short term memory loss - these are all post-sepsis syndrome symptoms. Not to mention the horrendous anxiety and fear of it happening again constantly being present. Doing anything new or different fills me with dread as I can't control the outcome -  just like getting sepsis. I was a young and fit woman in control of her life. But I am alive and well and feeling better than ever. My family were rocks for me and continue to be (ever patient and understanding). My mum says:

'For me as a mother I want to support Rachel as I supported her during and now post her illness. It does not matter what age your children are; you want to be there for them and when Rachel was ill it was so frustrating and I felt frustrated not being able to help. As a child I always wondered about the Great Wall of China and when Rachel suggested doing this together to raise money for such a good cause I could not refuse. I know it will test both of us physically and mentally but feel that we can overcome challenges however hard that come our way. '

My mum and I were always keen runners, having done the New York marathon together for mum's 60th. Prior to sepsis I was a 3-hour marathoner. Post sepsis I had to use walking sticks and have daily physio. In April 2016, 18 months after sepsis, my husband and I ran the London marathon for Kidney Research UK. In September 2016, less than 2 years after my mum's back operation, mum and I did the GNR together to raise awareness and money for the UK Sepsis Trust.

We're both on a mission to make people aware of this life-threatening condition - we don't want anyone to experience what we did. When recognised in time it's preventable. But you must know the symptoms. If we can save another person's life then it's a step in the right direction. Sepsis kills around 40000 people a year in the UK alone - more than bowel, prostate, and breast cancer together. Please learn about the symptoms. And push professionals if in doubt - trust your instincts.

So what can be more challenging, both physically and mentally than trekking the Great Wall of China!? The thought of it fills me with excitement but fear as well, as it's completely out of my comfort zone and I am not sure, because of my medical history, whether I can do it - it's up to 9 hours of trekking a day! But I didn't let sepsis beat me and I won't let this beat me either! Let's get training mum! Please support us in our adventure.

Thank you - and wish us luck!

Charity Registration No. 1158843
Find out more about charity fundraising