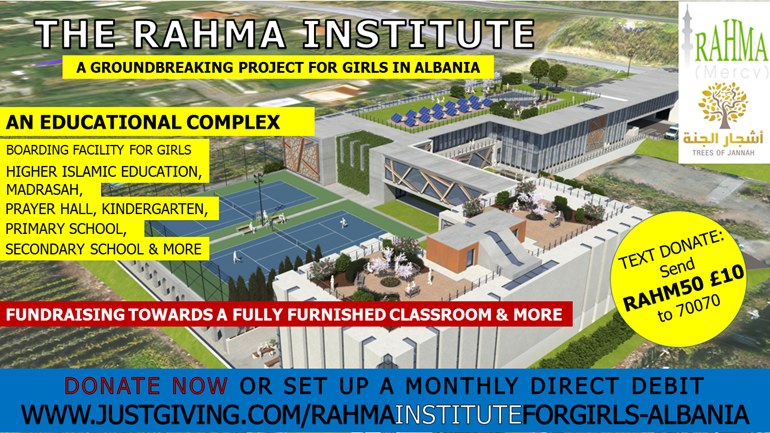 We provide aid and relief in the Balkans to improve lives impacted by communism.

The Messenger of Allah (ﷺ) said, "When a man dies, his deeds come to an end except for three things: Sadaqah Jariyah (ceaseless charity); a knowledge which is beneficial, or a virtuous descendant who prays for him (for the deceased)."

The ongoing success of The Rahma Academy has led us to build another complex to complement the existing work we are doing. Last year Rahma Mercy successfully appealed and purchased 6000m2 of land. The educational complex has been named the Rahma Institute and will include the following:

We are fundraising towards a furnished classroom including construction and furnishing (approx. £28K) within The Rahma Institute inshaAllah.

We have decided to build the Rahma Institute in phases with work to begin in early 2018. Initially we will be building the boarding facility at the rear section of the land and gradually working our way forward.

The projected cost for the total project is £4.5 million. We kindly request donors to donate wholeheartedly to get this project up and running.

May Allah Reward you immensely for your generosity, ameen, thumma ameen.

Rahma (Mercy) charity was founded in 1999 in response to the plight of the refugees from the war in Kosovo. We have since grown and become a registered Charity and an NGO in Kosovo. We support over 1000 Orphans, provide food aid, education, medical and help and sustain many other projects.

Charity Registration No. 1097682
Find out more about charity fundraising