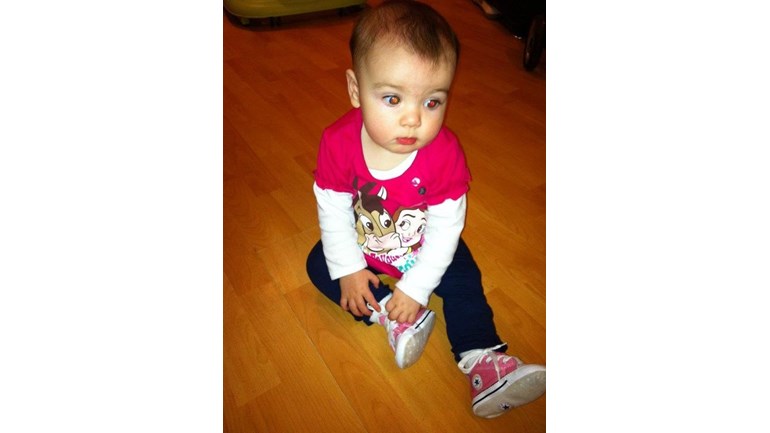 Lola Ella Melia Duncalf, aged 10 months, was the beautiful one and only daughter of myself, Lauren Melia and Andrew Duncalf. She was such a happy child every day of her life. She brought happiness to so many lives and brightened up everyone's day as soon as they saw her big sparkly eyes and infectious smile.

Lola loved to dance and would often have the whole family in stitches with her dance moves and she would even try sing along, though she couldn't say many words yet. Her favourite shows were Special Agent Oso, Mickey Mouse Clubhouse and Jungle Junction.  Whenever she would hear the theme tunes she would crawl over to see the television so fast and stare and clap along. When the other songs were played throughout the shows, particularly the ‘Hot Dog Song’, she would climb up the TV stand, to stand herself up to dance and sing along with Minnie and Mickey.

She loved chocolate and Wotsits and was always up to something, she had me and the rest of her family run ragged after her, whether she was pulling all the CDs out of their stand to re-arrange them or even trying to unwrap cousin Ethan's Christmas presents. She really was such a happy baby from the moment she entered the world, she was content in mine and her dada's arms.

After just 10 months of having her in our lives, she caught meningitis and septicaemia, a strain so rare it entered her blood stream and took over her body and within 24 hours our baby girl was declared brain dead. Heartbroken doesn't cover how we felt. We had no idea she was so sick when she had been doing the same dance moves the night before.

She had awoken in the early hours of Tuesday 24th of January 2012 being sick and feeling generally unwell. After a long day in the hospital being sleepy and floppy, meningitis was suspected but not confirmed, having antibiotics pumped into her small body, Lola lost her breath as she was transferred to the high dependency unit. She was resuscitated by a crash team and put into a coma so her body could fight this unknown infection that was growing rapidly in her body.

We were allowed just two minutes with her before she was transferred to the intensive care unit, where she was linked up to so many drips and had wires coming out of every part of her body. We spent time telling her stories of what we would buy her and what we would do as a family if she were to get stronger and fight this infection. We sang her favourite songs hoping she could hear us and kissing her all over. We were made to wear gloves, face masks and aprons as the doctors had never seen this infection before and were not sure how infectious it was.

We felt reassured our baby was going to be fine that night as we walked down the corridor to try to get some sleep just a few rooms away. It wasn't until the morning when we were told they had taken Lola off sedation and were expecting movement that our hopes were shattered. We had expected her to be pulling at everything and see her sparkly eyes light up again when she saw her mummy and daddy. When the nurses shone the light into her eyes, they were not responding. Bad sign Andrew told me.  I didn't have a clue what was going on, I was convinced that my baby couldn't leave me. I was there to protect her, I'm her mum, I'm supposed to be able to fix everything.

The doctors plus a donor specialist and a KBS nurse took us to another room. We were squeezing each other’s hand so tight, hoping to be told some good news. He told us, 'the girl in that bed next door is not your little girl anymore, the infection has taken over her brain and essentially made her brain dead'. I remember the second doctor who had been looking after Lola broke down when I asked, 'so you're telling me my baby is dying?' they grabbed hold of our hands tightly, as we broke down. It was all so fast. She was dancing on Monday I told them, I shouted to him that I'd shown him the video of her dancing just a few hours before she got sick. I could tell he couldn't believe it either.

We were left to say goodbye to our little girl who was being kept alive by machines. Whilst all our family were called and brought to the hospital, we asked a family friend who was a vicar to do a short blessing as Lola had not yet been christened. I held my baby in my arms whilst her daddy held Special Agent Oso on his knee, and had his arms around us all, while our family and friends came in to witness the blessing and sign Lola with the cross. We were left for a few moments before the ventilator was switched off and her heart stopped beating in my arms.

We are doing a number of events in Lola's memory to raise money so that other families do not have to suffer the same consequences as we have. I wouldn't wish this pain on anybody.

We love you Lola, we talk and think about you every day in the hope that we can be reunited again one day. Sweet dreams Boo. X