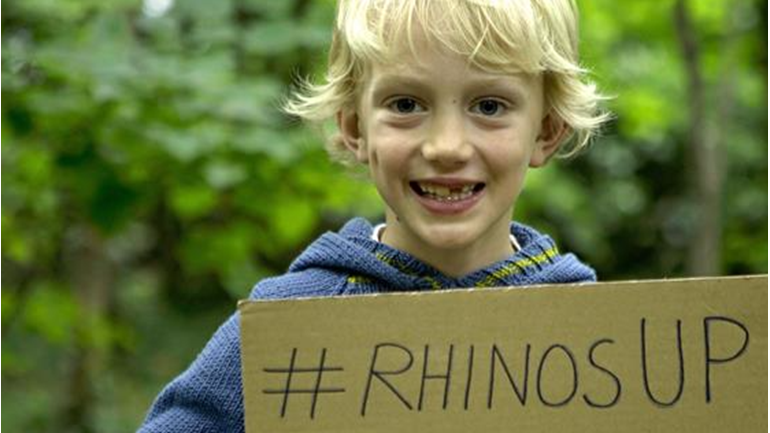 I am fundraising for Fauna & Flora International because they support Ol Pejeta and their rhinos.

Why £48,000? Shockingly, this is what some people will pay for a single rhino horn. By donating to this campaign, you will be investing in conservation as an antidote to those purchasing rhino horn and fuelling the decline of rhinos across the world.

Watch this short video to hear Frankie's take on the poaching crisis:

(Copy & paste the url link above into your browser)

I have been told that every time l had my breakfast, lunch and dinner last year, a rhino was killed by poachers in South Africa. This year it looks like even more rhinos are being killed every single day. As I thought about this and about how there are only three northern white rhinos left in the whole entire world it made me think that I have to tell people that extinction is real. That I might never get to see a rhino in my life. That poaching has to stop.

One night, at dinner, I told my Dada and my Mama about my plan. I told them I had been thinking and that I wanted to do something to raise money for Sudan, Najin and Fatu - the last northern white rhinos who live at Ol Pejeta Conservancy in Kenya. I am only 6 ¾ and I don’t really know how to change all the horrible wars and politics that allow poaching to go on, but I can do something to try and stand up for what is left. I told my Dada and Mama that I want to raise money for the armed rangers who guard the rhinos and for the dogs like Diego who help to stop poachers. With your help I especially want to raise money for the scientists and vets working hard to try and figure out a way to make new rhino babies and save these animals.

My idea is RhinosUp. I call my project RhinosUp because I am going to create a piece of public art in one of our local parks in Cambridge, UK. It will be a flowerbed in the shape of a northern white rhino planted from bee-friendly flowers. I want the flowers to come UP and the rhinos to come UP from the dead. Time is almost up for the northern white rhino. I hope it will make us think that what has happened to the northern white rhinos is a horrible example of what can happen, like how the loss of habitats threatens our bees here in this part of the world. I hope this piece of art will remind us about how we are all connected. If you are passionate about saving animals too, then I hope you can help me raise the money that the rhinos need.

I am working with Cambridge City Council to create this flowerbed. They are giving me lots of help to make this happen and we're going to plant it in Spring 2018. The most important thing is that I want to use it to raise awareness and to fundraise for Sudan, Najin and Fatu and the future of rhinos. All the money we raise will go to them because they really need our help. I need you to help me reach my target of £48,000 if you can.

I have a friend called Martin Aveling who is a really good wildlife artist. He tells me lots about animals and is helping me with my project. One day when he was visiting me and my family, he told me all about his visit to Ol Pejeta Conservancy in Kenya. As we made a rhino out of play-doh, he taught me about the different rhinos and told me so many of the things that I now know about northern white rhinos. Martin asked his brother, Tom, who is a film maker, to help make a video for me.

Together, we want to tell the world about the northern white rhinos. We hope you like the video and share it with your friends.

A note from Martin Aveling:

I am backing Frankie on this project because the only positive result for rhinos relies on the next generation taking up the mantle and being the wildlife guardians of the future. Witnessing such passion and understanding in someone so young must only be encouraged. I hope you will support him too and be inspired, as I have, to do more for rhinos. Any help you can give him will make a difference.

Frankie's father is from England and his mother is from New Zealand. He lives in Cambridge, UK and likes to spend as much time as possible playing in the woods and learning about animals. He also enjoys drawing, riding his skateboard and playing hockey and football. He really loves Rhinos!

Or you can email Frankie's secretary (aka "mama") at rhinosup@talktalk.net

Thanks again for your support!

Charity Registration No. 1011102
Find out more about charity fundraising