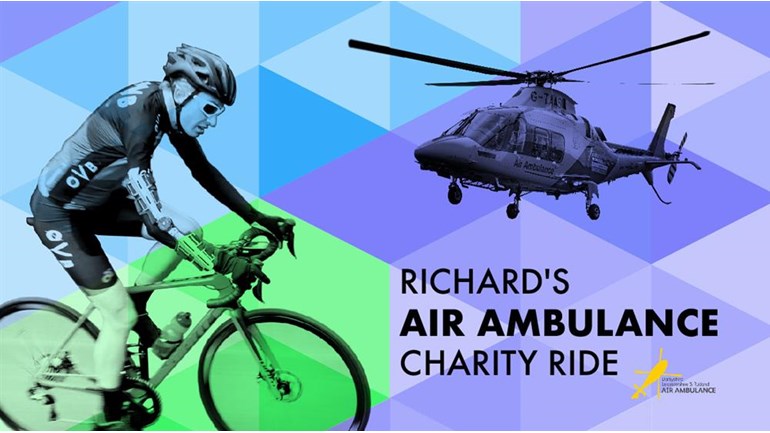 Retracing the route of my accident, raising money for Derbyshire, Leicestershire & Rutland Air Ambulance because in 2017, they saved my life

In March 2017 I was involved in a very serious cycling accident when I was hit by a car and nearly lost my life. At the side of the road, I had multiple injuries including broken spine, shoulder blade, elbow, ribs, massive head injury, 2 collapsed lungs plus internal bleeding so bad, I had no pulse in my arm. I'm lucky to be alive. In the minutes, hours and days after the accident, the actions of many people helped save my life, one of which was the Derbyshire, Leicestershire and Rutland Air Ambulance (DLRAA).

Thankfully I've made a good recovery and have returned to cycling. On 7th September I'll be retracing the 70 mile route of the 2017 accident for the first time to raise money for the DLRAA.

As a charity, the DLRAA relies on donations and fund raising events like this. Prior to 2017, I'd never needed the help of an air ambulance. However there is no doubt I would not be riding a bike or kissing my boys goodnight if it wasn't for the DLRAA support that day. Please support a charity I hope you'll never need.

My life saving journey aboard the helicopter cost the charity £1700 so that's my target. However, would be great to raise more for others in need of the air ambulance.

Donating through JustGiving is simple, fast and totally secure. Your details are safe with JustGiving - they'll never sell them on or send unwanted emails. Once you donate, they'll send your money directly to the charity. So it's the most efficient way to donate.